Re-holster your handgun so you don't shoot yourself 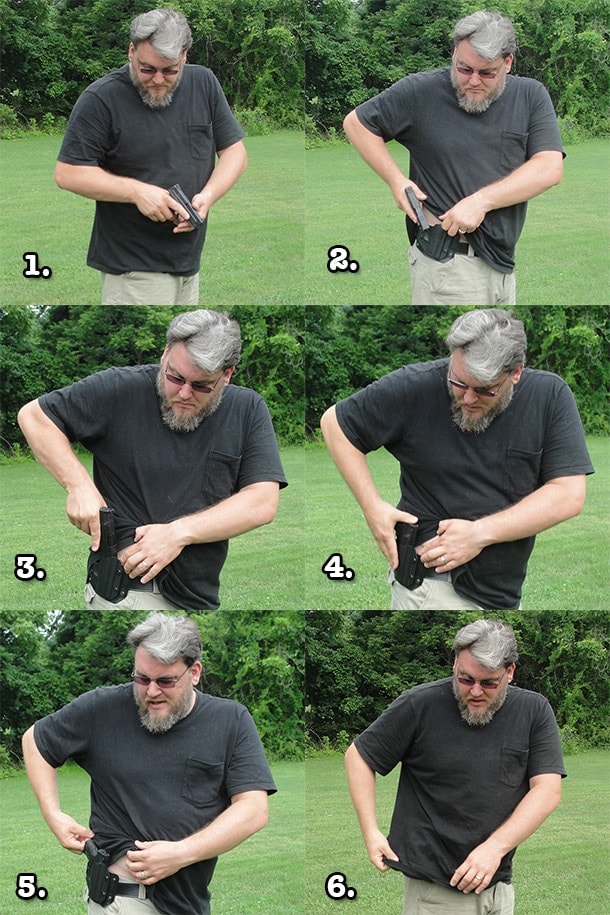 Re-holstering your handgun can be a three, four, six or eight step process–that’s up to you– as long as you follow the four safety rules religiously and move slowly and deliberately. (Photo: Joshua Gillem)

An accidental discharge could happen at any stage during the course of handling a live firearm. However, improper re-holstering is more often than not the culprit. Most, if not all, of the these discharges could be totally avoided by following the basic safety rules that are designed to keep stupid things from happening. In fact, most accidental (or negligent, rather) discharges happen due to a lackadaisical approach to handling a loaded weapon, or because the handler feels cocky regardless of skill level.

When I was in the Marine Corps., basic firearms instruction and safety was drilled into me each day of my life, whenever I was at the rifle, pistol or HMG range. The last thing my instructors wanted was for a fellow Marine to accidentally get shot because someone didn’t follow the safety rules. You know the ones, right?

While all four of those rules are imperative, and must never be downplayed, I believe that the first rule listed above is the most important one. It encompasses the others within it, and if EVERYONE followed it, accidental discharges would be a rare occurrence.

After all, not all weapons have a manual safety and a shot could still be fired when your finger is straight and off the trigger by snagging something. And you generally have to muzzle at least a part of your leg, or side, when you re-holster your weapon (depending on your mode of carry).

But if we were to treat our weapons as though they were loaded during each stage of handling, it would ensure that we take great care. What does that look like when putting your gun back into your holster?

If you have just finished firing, take a pause. Use a second or two to gather yourself. There is no rush to re-holster your gun. It is not a race.

Next, if your gun has a safety, make sure it is engaged. It is there for a reason and I’m guessing that you bought a gun with this feature because you liked it, so put it to use. If your gun has safety features, but no manual safety, like the Springfield Armory XD, make sure those passive safeties aren’t deactivated when you go to re-holster your weapon.

In other words, when you re-holster a handgun with a grip safety, keep your hand away from the grip so you don’t disengage it. Another thing you’re hopefully already used to doing is keeping all of your fingers outside of the trigger guard until you need to kill something (whether paper or criminals).

Always look to make sure that there is nothing that could snag the trigger. This could be a piece of clothing, or even a part of the holster itself. This is likely one of the top reasons why people shoot themselves in the leg/groin. If you need to reach over with your weak hand to make sure the holster is free and clear of any potential snags, go ahead and do it.

With your weak hand already in place, lift any excess clothing (shirt) up and out of the way, to make sure that it won’t fall down into the holster and snag the trigger. While your other hand is in the area, use it to guide your gun into place, while keeping all fingers away from the trigger. If you holster your weapon on a part of your body you can see, look for any obstructions or potential issues before you put the gun away.

Sometimes equipment can get worn out. Periodic inspections of your holster to make sure that it isn’t coming apart are necessary, and should be done frequently. If it is damaged, buy a new one. Don’t risk it. There are documented instances where an accidental discharge happened because of faulty gear, so make sure it is in good shape, and if it isn’t, don’t use it.

Re-holstering a gun is almost as important as drawing a gun, but there is no need to do it as fast. It is mind boggling to see people at the range who put their gun back in almost the same manner/speed as it was taken out. Practice holstering your weapon slowly and with care so that you develop muscle memory with it, but, remember, putting your gun away is not a race.

If you need to use two hands to safely put your gun back on your hip, do it. Don’t worry about whether or not you’ll look stupid because I guarantee that you’ll look worse if you shoot yourself in the leg. Your other hand should only guide the gun into the holster, though, and nothing more.

Finally, make sure your holster is a type that you’re comfortable with reholstering. What I mean here is that OWB holsters tend to be easiest to slide a gun into, while IWB holsters are so close to your body that it may take some finagling to get it in and may not be practical at all while still attached to your person. If you’re having issues getting your gun in place, it may be time to look into getting a new holster that is easier to work with.

Safety is all important when it comes to handling firearms. First, we need to treat every weapon as if it were loaded, as we follow the most basic of safety rules. Second, we need to train enough so that our muscles know exactly what to do during each stage of live weapon handling. If we all do these things, the number of accidental discharges will be greatly reduced.