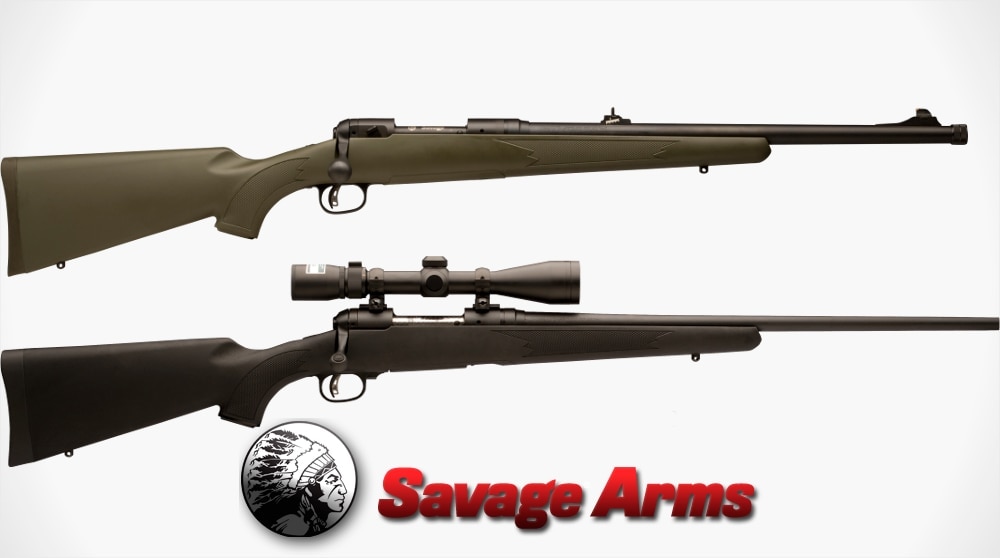 Savage’s .338 Federal rifles, including the Model 11 Hog Hunter, top, and Trophy Hunter XP, bottom, cost as little as $578, making even easier to get into shooting the newer cartridge. (Photo: Savage)

Savage Arms introduced a whole family of new rifles all chambered for the big-bore short-action .338 Federal cartridge. The cartridge was developed for .338-caliber shooters looking for something that handles better and recoils less for hunting and target shooting at closer ranges.

The .338 Federal cartridge uses a .308 case necked up to accept .338-caliber projectiles. It has a bit more power at the muzzle making it an excellent game-getter inside 400 or so yards, depending on the game, of course. For North American game it’s very capable.

“The .338 Federal is a great caliber with a lot of potential that fills somewhat of a hole in our lineup,” said Bill Dermody, Savage’s marketing director. “It provides great energy with heavier bullets, but without the magnum recoil. While it’s a great all-around cartridge, it’s a particularly good fit in the Model 16 Bear Hunter and the Model 11 Hog Hunter. I personally can’t wait to try it out in the field.”

The new rifles include a Model 11 Hog Hunter, Trophy Hunter XP and Long Range Hunter, a Model 16 FCSS Weather Warrior, Bear Hunter and Trophy Hunter XP, all chambered for .338 Federal. They’re also affordably-priced with MSRPs starting at just $578, with the most expensive models still approachable at around $1,100.

Savage’s three Model 16 .338 Federal rifles are also fairly affordably-priced although they’re not budget guns. The least expensive is the Trophy Hunter, which, like the Model 11 version comes with a Nikon 3-9×40 scope and a $762 suggest retail price.

A step up from that is the Weather Warrior at $911 and the camo-dipped Bear Hunter at $1,066. In addition to the camo print the Bear Hunter has a fluted, threaded heavy barrel and the rifle comes with an adjustable ported muzzle brake.

At the high end we have the Model 11 Long Range Hunter, a rifle that’s brings everything to the field with an extended 26-inch threaded barrel, adjustable muzzle brake, adjustable cheek rest and black on black finish. The Long Range Hunter is the most expensive of the set at $1,136, although real world prices will start around $900.

The .338 Federal cartridge doesn’t offer .338 Lapua Magnum power and that’s the point of it. It does enough to have the same effect at closer ranges without the recoil of the longer-range magnum. Not only does that spare shoulders it means that the rifles don’t have to be so heavy to slow down that recoil — all of these rifles are in the 7- to 8-pound range.

“Short-action rifles are lighter and easier to carry in the field, making that shot on a trophy animal that much better,” said Mike Holm, Federal product manager. “There is also a wide selection of .338 caliber bullets to choose from, which only adds to your performance options.”

Holm developed the cartridge along with Sako, who also offers rifles in .338 Federal. “The .338 Federal may be the perfect big game cartridge,” Holm added. “It fits in short-action, lightweight rifles and delivers the range and terminal energy to take down any North American big game animal. I have also witnessed it performing perfectly on plains game in Africa.”