Showdown for bill to curtail gun speech in California schools 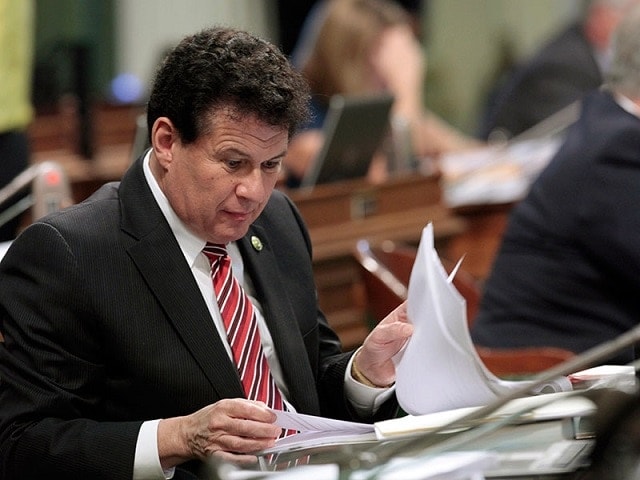 California State Sen. Marty Block, D-San Diego, is backing a measure that could change how gun threats are interpreted in schools across the state, even if it wasn’t intended as a threat. (Photo: capradio.org)

An expansive proposal termed dangerous by gun rights advocates to both First and Second Amendment rights is up for an important vote in the California Assembly.

The bill, which could allow many expressions that include the use of a gun to be considered as a threat, was introduced in the state Senate in February with the support of a prominent prosecutor and passed that body in an easy 36-0 vote in May. Now, it’s in the hands of the Assembly Public Safety Committee, where pro-gun advocates hope to halt its progress.

Framers of the legislation, that would create a new crime under state law, see the bill as expanding law enforcement’s ability to stop crime from happening at schools.

“Threats of gun violence are costly to schools and law enforcement, and result in lost learning time for our students,” said Sen. Marty Block, D-San Diego, in his author’s statement on the bill. “These threats also create anxiety and fear for students, school staff, and parents.”

Block’s proposal, SB 456, allows that any person who threatens to use a firearm on school grounds or in a statement made via phone, computer or other device, is to be taken as a threat, even if there is no intent of actually carrying it out. The bar of determining whether the threat was real or not will depend on if a school or law enforcement agency makes preparations based on the threat. This could lead to something as innocent as a pop-tart gun, if taken seriously, to be adjudicated as a violation of the law.

Those found guilty of this new crime would be liable for a misdemeanor punishable by up to a $1,000 fine or a year in county jail, or both, as well as be held liable for reimbursement of any costs associated with countering the perceived threat.

At least one district attorney, San Diego County’s Bonnie Dumanis, has come out strong in support of the bill, arguing in her jurisdiction last year at least 130 threats were logged in area schools.

“Threats of school violence have increased to an alarming rate and individuals need to know they’ll be held responsible if they make such threats,” Dumanis said. “In light of the threats, and number of school shootings that actually take place across the nation, students and their families have a right to feel safe.”

However, gun rights advocates argue language in the bill is vague and doesn’t define what an actual threat is.

“We certainly don’t oppose the criminal prosecution of people who make true threats against innocent students, teachers, and school staff,” Brandon Combs, president of the Firearms Policy Coalition, told Guns.com. “Our concern is that the measure, as it stands, is overly-broad and could chill or criminalize First Amendment protected speech.”

A key committee vote on the legislation Tuesday is seen as the most likely chance for lawmakers to either kill the proposal or at least add protections to the bill before it is sent on to the floor.

“We’re cautiously optimistic that the Assembly Public Safety Committee will appropriately amend the bill into a form that respects First Amendment rights while giving prosecutors the tools they need to deal with real criminals,” Combs said.