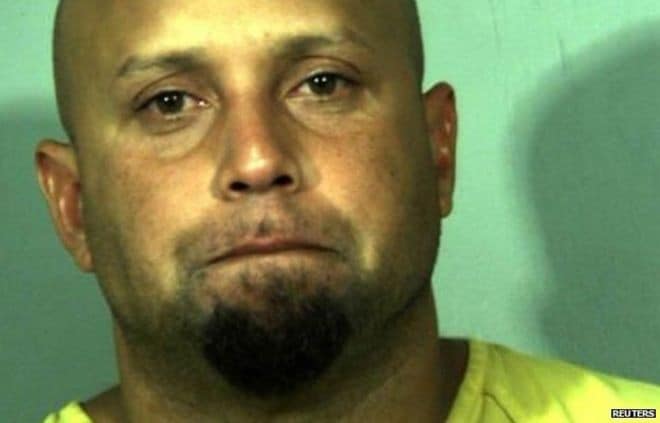 Omar Gonzalez, 43, will be barred from Washington, D.C. during a supervised release after a prison term.

The armed man who jumped the fence and stormed the White House lawn in September was sentenced today to 17 months in prison.

Omar Gonzalez, 43, of Copperas Cove, Texas, was sentenced in a federal court for one count of unlawfully entering a restricted building or grounds, while carrying a deadly or dangerous weapon and one count of assaulting, resisting, or impeding certain officers or employees.

Upon completion of his prison term, Gonzalez will be placed on three years of supervised release. He also will be required to participate in a psychiatric evaluation and cooperate fully with the Secret Service in any assessments they deem necessary to make of Gonzalez’s risk.

“Mr. Gonzalez is now paying the price for his foolish decision to jump the fence and run inside the White House,” said Vincent H. Cohen, acting U.S. Attorney in the District of Columbia.  “When he finishes his prison term, he will be barred from entering the District of Columbia and must receive psychiatric treatment.  The prison sentence imposed by the court should deter others from taking actions that needlessly put the First Family and White House employees at risk.”

Gonzalez was searched and a folding knife, with a serrated blade that was over three and one-half inches long, was discovered in his right front pants pocket.  After his arrest, he gave oral consent to search his vehicle.  The vehicle contained hundreds of rounds of ammunition, in boxes and in magazines, hatchets and a machete.