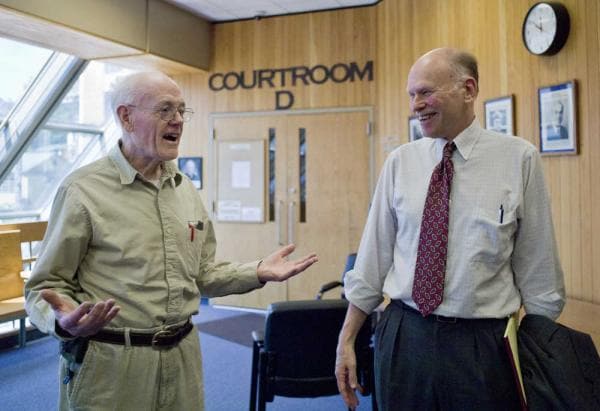 Ray Coxe of Rayco Sales in Juneau, Alaska, was cleared of any wrongdoing for supplying the murder weapon used to kill a 26-year-old in 2006. (Photo: The Juneau Empire)

A jury this week found an Alaska gun dealer not liable for selling the gun used in a shooting death almost nine years ago.

The family of the victim, 26-year-old Simone Young Kim, on Monday was awarded $10 million by the court, who ordered Kim’s killer, Jason Coday, to pay, the Juneau Empire reported.

The family is reportedly not likely to see the money because the killer was homeless, living in the woods and has been incarcerated since the 2006 murder.

“Unless they find out he has an oil reserve,” the family’s attorney, Mark Choate, told the paper on Tuesday.

Coday was reportedly a fugitive at the time of Kim’s murder. On Aug. 2, 2006, Coday purchased a rifle for $200 from Ray Coxe at the Rayco Sales gun shop in Juneau, Kim’s family argued. It was the same rifle he reportedly used to gun down Kim two days later.

In 2008, the Kim family filed a wrongful death lawsuit against the gun store and it’s owner, Ray Coxe, claiming he illegally sold the gun to Coday, the Empire reported.

A jury cleared Coxe of any wrongdoing earlier this month, but federal authorities revoked his federal firearms license.

Coxe received his revocation letter on Jan. 27, when he had more than $100,000 of guns left in stock, KTOO Public Media reported.

The Brady Campaign and Center to Prevent Gun Violence acted as co-counsel for the Kim family and on Wednesday expressed its disappointment in the jury’s verdict.

“We are extremely disappointed that the Alaska jury in this case did not decide to hold Ray Coxe accountable for his outrageous and reckless behavior,” said Brady President Dan Gross in a statement. “Fortunately, though, federal authorities have decided to act and have very rightfully revoked his license to sell guns.”

The Brady Center said 5 percent of “bad apple” dealers in the country are responsible for selling 90 percent of guns used to commit crimes.

“The Kim family’s case has made the people of Alaska safer by helping shut down this ‘bad apple’ gun dealer,” said co-counsel Jonathan Lowy, director of Brady’s Legal Action Project. “The fact that a gun dealer who repeatedly violated federal law was given special immunity from basic negligence liability should be a wake-up call to Congress to amend the Protection of Lawful Commerce in Arms Act. There is no good reason why federal law should specially protect a gun dealer who profited from and armed a meth-addicted fugitive with a gun he could not legally buy.”