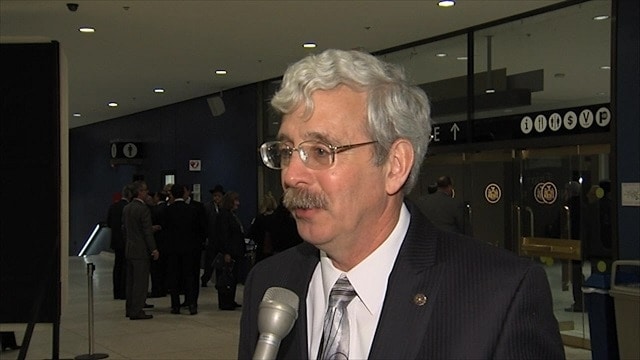 A proposal to require gun locks on firearms not in use across the Empire State made it through the state Assembly in a 77-58 vote Tuesday.

The bill, termed “Nicholas’s Law,” after a 12-year-old who was killed in an accidental shooting by a middle school classmate, was introduced in January and now heads to the Senate after a largely party line vote by Assembly Democrats.

“I applaud the State Assembly’s vote today passing Nicholas’s Law, which will prevent future tragedies such as the one that devastated our family,” said Oksana Naumkin, Nicholas’s mother. “With today’s vote, we are a step closer to enacting a statewide law that will mean other families will not have to endure our ongoing pain. Now it is the Senate’s responsibility to act. We are not going away. We will continue to fight for Nicholas’s Law until it is the law of the State of New York.”

The bill, A.53, aims to criminalize gun owners who fail to store their firearms in accordance with the measure’s guidelines. Those guidelines include locking any shotgun, rifle, antique firearm or handgun in one’s possession either in a gun safe or with a lock.

In the introduction to the legislation, the bill’s author noted that in 2011 in New York, 60 children under the age of 18 were hospitalized with an accidental nonfatal gun injury.

“Preventing children from obtaining access to firearms by requiring safe storage will enable us to prevent child accidents, suicides, and school incidents. First, safe storage can prevent those tragic, accidents where a child finds a loaded firearm and accidentally shoots another child,” reads the statement.

The measure also states that any gun transferred, even in a loan, must be supplied with a gun lock or safe. This led some Republican lawmakers to question the potential overreach of the bill, which they contend could ensnare hunters on the way to the field, or those who desire to have an accessible gun for home defense.

“It says for 600,000 hunters, don’t pick up a cup of coffee on the way, (and) don’t use the rest room on your way back unless you bring your rifle with you,” said Assemblyman Andrew Goodell, R-Chatauqua County.

The passage of the bill comes as the capital city of Albany is mulling a similar local proposal that would require gun owners to secure their firearms under penalty of law that could include a year in jail.

Earlier this month the U.S. Supreme Court denied a petition to hear an appeal in a case challenging San Francisco’s controversial 2007 mandatory gun lock law. The case had been winding its way through litigation for six years and, although federal judges at all levels upheld the city and county’s ordinance, not all of them agreed with its constitutionality.

“There is consequently no question that San Francisco’s law burdens the core of the Second Amendment right,” wrote Justice Clarence Thomas in a dissent joined by Justice Scalia to the Supreme Court’s refusal to hear the case last week.

Nicholas’s Law now heads to the Republican-controlled state Senate where it is facing a tough battle for passage on to Gov. Andrew Cuomo. The Senate Codes Committee already killed a similar proposal there by a 9-7 vote in April.