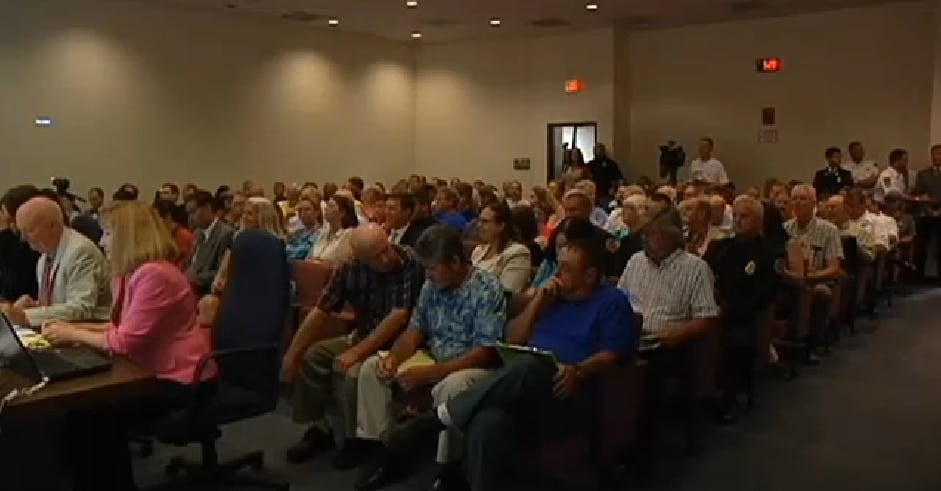 It was a full house Monday night as residents discussed their concerns over backyard target practice and a possible ordinance that would prohibit such activity. (Photo: Fox Carolina)

Following complaints of gunfire, the Spartanburg County Council is attempting to draft an ordinance to prohibit shooting firearms on private property in the South Carolina county and it is an idea that’s not going over too well with many residents.

It appeared to be standing room only during Monday’s council meeting as residents took to the podium one at a time to voice concerns, a local Fox affiliate reported. While some residents remained rather abstract, citing that to enact a regulation wasn’t likely to make the situation better, others were more precise with their thoughts, expressing disdain over what they perceive as a violation of their rights.

“Everybody here, for the most part, is sick to death of their constitutional rights being taken away from them,” resident and gun owner Michelle Wiles told WSPA.

“We can’t let complaints take precedent over rights and that’s what we’re having here,” added resident Jim McMillan, whose 96-year-old mother keeps up her skills by shooting on her own property every week.

McMillan said he shoots skeet on his property and fires handguns as well, and to restrict that right will impact his ability to teach his grandchildren about handling firearms.

But others, like resident Michael Fowler, are concerned over the safety aspect of firing guns in the county, especially during the summer time when children are out of school.

“The operative word is safety,” Fowler said during the meeting. “Safety for our family, our children.”

But resident Cherry Laurens said, “It is a matter of safety, but it’s also a matter of liberty. They both count.”

Currently, there are no restrictions concerning discharging a firearm in the county, but Councilman David Britt said the new ordinance wouldn’t effect the entire county, only densely populated subdivisions. He said many of the lots are less than an acre, some less than half an acre, and it’s cause for concern when people are shooting in their back yards, especially where children are present.

Still, residents are concerned that such an ordinance will only open the door to further restrictions down the road.

Britt added that the ordinance is still only in the early stages, and Council chairman Jeff Horton said that the committee, which is made up members of the Spartanburg Sheriff’s Office as well as residents from the six districts within the county, currently has no deadline or time frame in which the proposal must be drafted, but it could take around three months or more. Before a proposed ordinance can be passed, it must first undergo three readings and a public hearing.

“This is just a chance to have the citizens look at the problem and come up with some solutions,” Britt said.