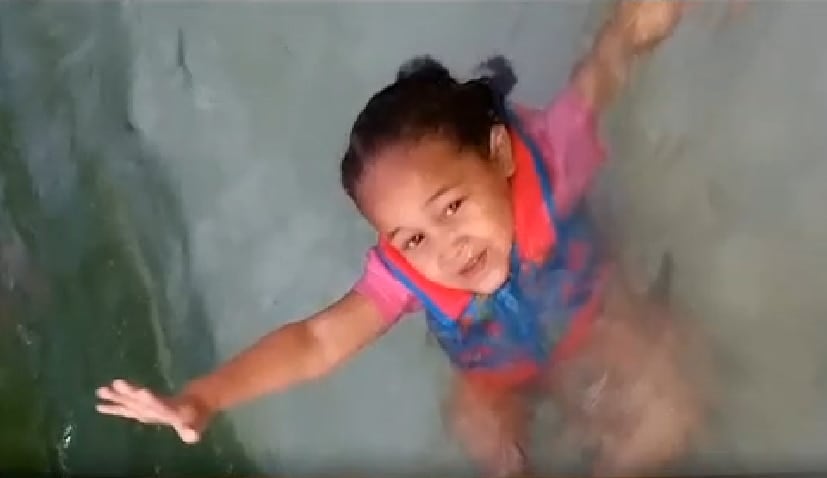 Chris Ford said the dog regularly played with his daughter and never before showed agression towards her or anyone else. (Photo: ABC)

A 4-year-old girl is in the hospital recovering from surgery after being mauled by a dog, while her father faces a slew of charges for fatally shooting the dog that attacked her.

Zaynah Ford was at her grandmother’s Phoenix home on Saturday playing outside when all of the sudden her father, Nevaldo “Chris” Ford, heard the child scream. Ford ran outside to see the family dog, a pit bull named Tobin, viciously tearing at his daughter’s head.

“My baby is bleeding, I can’t even see her face, I don’t know where all the blood is coming from, I just see a big hole in her head … I pulled him off my daughter; I threw him, as soon as I threw him I grabbed my daughter and ran inside,” Ford told a local Fox affiliate, still emotional over the ordeal.

Family members called 911 and tended to the little girl’s wounds as best they could while they waited for the ambulance to arrive.

Meanwhile, Ford grabbed a rifle and walked back outside where the dog was located. Tobin retreated to his kennel, but Ford placed the rifle against the kennel and fired four shots into it, killing the dog.

“I didn’t even know him at that point; he wasn’t the dog I raised,” Ford told a local ABC affiliate. “I just knew he was going to attack someone else.”

According to Ford’s mother, the dog had a history of aggressive behavior and she told her son he needed to get rid of him. But Ford said while Tobin would display typical puppy behavior – tear up shoes, chew things up – he never showed aggression toward people prior to Saturday.

When police arrived on the scene, Ford was arrested. He now faces charges for animal cruelty, endangerment, felony possession of a weapon by a prohibited person, assault by vicious animal and discharging a firearm within city limits.

Ford admitted that it might not have been the best course of action to shoot the dog himself and it certainly wasn’t an easy decision for him, but he was likely in shock after seeing his daughter attacked and believed that he already knew Tobin’s fate.

“No matter who shows up, the ending result is still gonna be this: A dog attacks a child, you think he’s gonna live?” Ford said.

Ford, who has a felony conviction for identity theft from 2004, said he knew he wasn’t supposed to even be in possession of a gun, but he feels he was protecting others from possible harm in the future.

Meanwhile, his daughter suffered extensive injuries from the attack, including a punctured skull. She underwent surgery and is expected to survive, but will likely have permanent damage and disfigurement.