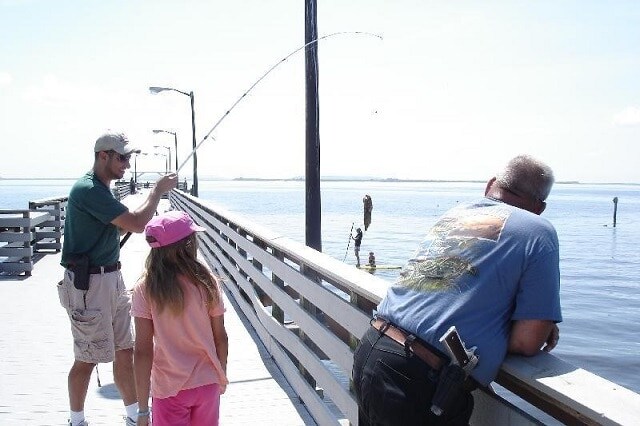 Florida Carry member George Freeman had an altercation this weekend with a Tampa cop that wasn’t aware of state law. (Photo: Florida Carry)

Over the weekend, an angler detained by police in Florida and warned to stay away from the pier under threat of trespassing charges was apparently done so in error.

The incident occurred at the public pier at Ballast Point on Tampa Bay when police stopped a member of a state gun rights group, Florida Carry.

Florida is one of just five states that ban the practice of open carry.

However, it is legal if done while target shooting, hunting or fishing and gun rights advocates have long exercised that right.

“Last weekend one of our members, George Freeman, was detained for over an hour after a Tampa Police Officer unsuccessfully attempted sneak up behind him while fishing and grab his holstered handgun,” said the group in a statement.

“George turned immediately when he felt an unknown person grab for his gun while reaching for a concealed backup gun. As soon as he saw the uniformed officer George stopped before he drew his backup and did not resist the seizure of his handguns. He also presented his valid Florida Concealed Carry License to the officer,” read the statement.

The group maintained that Freeman was detained for over an hour and then released with a warning to stay away from the public pier under threat of trespassing charges.

This, in turn, has led to Florida Carry planning a lawsuit against the department and establishing a crowd-funding drive to pay for legal services.

With this, authorities advised Guns.com that the weekend incident was all a big mistake.

“It was an error on the officers’ part,” TPD Spokesperson Andrea Davis told Guns.com via email Thursday. “The trespass warning will be rescinded and we are working to contact Mr. Freeman’s to apologize to him.”

As for the future, Davis advised that to mitigate further such instances, officers are being reminded that open carry of a firearm while fishing is legal in Florida.

Therefore, Mr. Freeman, if you are out there, the Tampa Police Department has something to tell you.

We have sent the Tampa PD contact information for Mr. Freeman’s attorney.  He, and Florida Carry, are represented by Eric J. Friday.

How we proceed at this point is entirely dependent on what the City of Tampa and its police department will agree to do in order to satisfy Mr. Freeman and to insure that uncalled-for incidents such as this cease permanently.