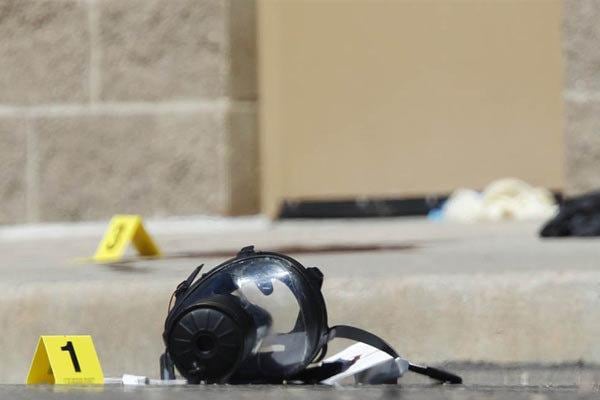 A gas mask marked as evidence sits on the sidewalk outside the Century 16 movie theater after the July 2012 shooting.

“Those who ignite a fire should be responsible for the cost of suppressing it before it becomes a conflagration,” wrote Senior District Judge Richard P. Matsch about the Brady Campaign when he awarded $203,000 on June 17 to the retailers the organization sued. He was critical of the group for using the court to publicize its political agenda at the expense of a handful of retailers.

“The Brady Center may be pursuing a righteous cause, but the defendants should not have to bear the burden of defending themselves in this inappropriate forum,” Matsch wrote.

In the initial complaint, Brady claimed Lucky Gunner, the Sportman’s Guide and BTP Arms failed to properly vet James Holmes before they sold him items he would later use to kill 12 and wound 70 inside a movie theater in Aurora, Colorado. Along with Brady, parents of one of a victim killed in the shooting also signed on as plaintiffs.

While filing lawsuits in the name of affecting public opinion is not unusual, Matsch suggested that Brady targeted the retailers to piggyback off of the high-profile incident and not because they were explicitly malicious or negligent.

“The injunctive relief requested is to stop all the defendants’ commercial activities until their business practices have been changed and approved by the court. There is nothing in the record to indicate that the plaintiffs or the Brady Center, the apparent sponsor of this case, made any attempt to persuade the defendants to make any alterations of those practices before bringing this highly publicized lawsuit,” Matsch wrote. “It would be highly unlikely that the defendants would seek to emasculate their businesses to conform to an undefined standard of care that would have prevented a purchaser of their products from using them in a barbaric assault on innocent people in an entertainment venue.”

“It may be presumed that whatever hardship is imposed on the individual plaintiffs by these awards against them may be ameliorated by the sponsors of this action in their name,” Matsch added.

Although in the lawsuits Brady asked to be awarded with a change in policy instead of money, the group was ordered to pay the defendants’ legal fees because of the lengthy amount of time and effort it took to prepare the defense.

Brady filed the suit in September shortly after launching an effort to target unscrupulous gun dealers. “Stop Bad Apple Gun Dealers” is a national campaign to raise awareness through protests and litigation of gun stores that either intentionally or negligently sell firearms to straw buyers. The Lucky Gunner was the second suit filed during the campaign.

Matsch, who was nominated in 1974 by President Richard Nixon and presided over the trial of Oklahoma City bombing defendants Timothy McVeigh and Terry Nichols, dismissed Brady’s lawsuit in April. He cited the Protection of Lawful Commerce in Arms Act in the ruling, a law passed in 2005 to shield gun makers and retailers from liability for injuries caused by a third party with their products.

The trial of the shooter is still ongoing. Prosecutors are preparing to rest their case today and Holmes’s attorneys are scheduled to begin arguments for his defense next week.