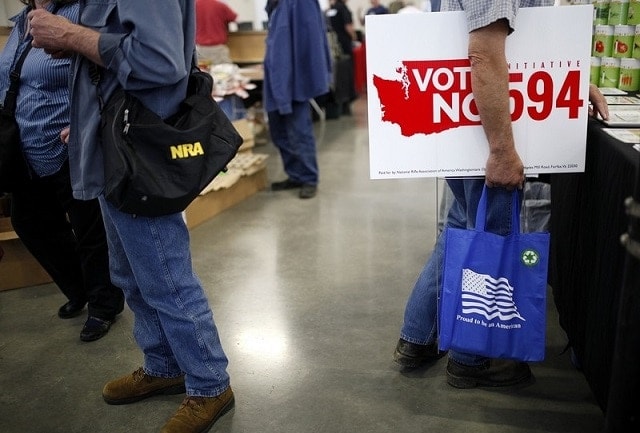 As backers of the state’s new background check argue they have won, a gun show in Washington that does not agree is set for this weekend. (Photo: Ian Terry/The Herald)

With a gun show set for this weekend openly ditching Washington State’s new expanded background check requirements, the group behind the law deems it an “enormous success.”

However, the organizers of this weekend’s Arms Expo 2015 in Yakima don’t buy into the constitutionality of the new law.

“We are practicing active non-compliance with 594,” Maria Bosworth, an organizer with the expo told Guns.com Thursday.

“Seven months of preparations, seven months of planning and strategizing all come down to this weekend,” reads expo literature. “It is a venture made for and by the patriots, and we are humbled to see how many people across the country are giving of their time, efforts, and money to ensure its success.”

Representatives with the Washington Alliance for Gun Responsibility, the group who fronted I-594, contend its all in their court.

“The gun lobby continues to oppose federal and state background check laws, but Washington state and the country overwhelmingly believes that with rights come responsibilities,” Potter said. “The reality on background checks is that the will of the people of Washington is being affirmed and upheld.”

The new law so far this year has withstood the opening skirmishes of a federal lawsuit brought about by a number of pro-gun organizations. Further, national gun control groups led by Moms Demand Action have resisted a three-pronged legislative assault on 594 to clarify what are seen as some of its more ambiguous aspects.

“We are standing. Today, tomorrow, and always,” expo leaders said in an email. “We will not comply.”