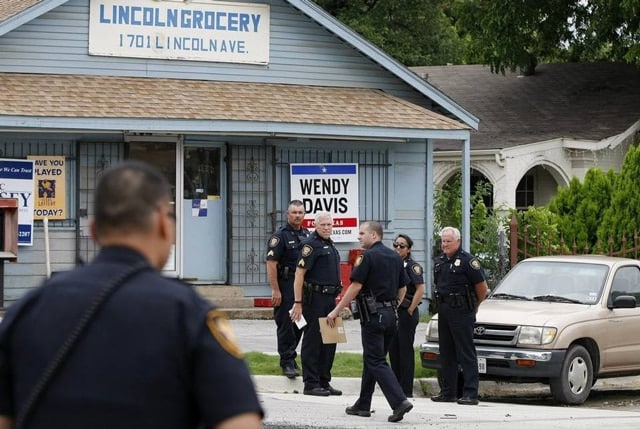 Neighborhood residents said there hasn’t been a problem with violence in the area for quite some time after authorities cracked down on gangs in the late 1980s. (Photo: Fox)

A daytime robbery at a small corner store in Fort Worth ended abruptly when the owner pulled out a gun and killed the shotgun-wielding robber after handing over his wallet.

It was just before 2 p.m. Wednesday when three Hispanic men walked into the family-owned grocery. One of the suspects demanded money from the owner, while the second aimed a shotgun at him and the third stood by watching.

The owner, whose name was not released, told a local CBS affiliate that he handed over his wallet, but as the suspect went to remove the money, the owner grabbed his own gun and shot the second, armed suspect. At that point, the remaining suspects fled from the scene, leaving their wounded accomplice behind.

When police arrived on the scene, the suspect was pronounced dead, and later identified as 18-year-old Christian Carvajal of Fort Worth. A description of the other two suspects was not immediately available. Although the shop was equipped with security cameras, it’s unknown if they captured images of the suspects.

No one else was in the store during the robbery and, although shaken up, the owner was unharmed.

Nearby neighbors told the Star-Telegram that the man, who is Vietnamese, has run the shop with his wife for about 30 years, and it’s often open late at night.

“Everyone knows each other around here. North side is like a little town,” said one man, who did not wish to be identified.

Residents told reporters that they support the man’s actions.

“Good for him,” said neighbor Raymon Jara. “Better them than him I say, because he’s a part of our neighborhood.”

Currently, no charges have been filed against the store owner.

“It’s always permissible to defend yourself,” Sgt. Steve Enright with the Fort Worth Police Department told a local Fox affiliate. “He felt in fear of his life having a shotgun pointed at him and believed he was being robbed, so it’s potentially an acceptable response.”