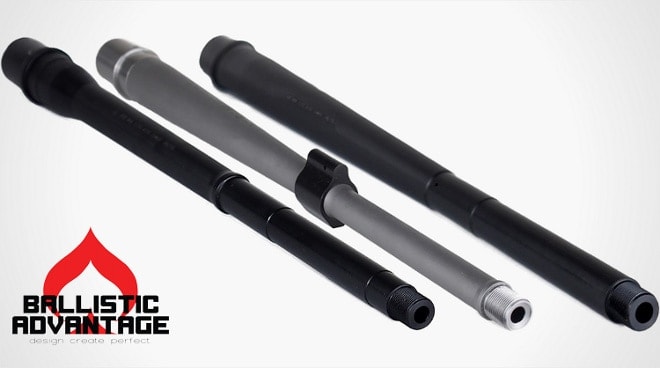 AR rifles chambered for .308 Winchester/7.62 NATO are the new hotness with companies small and large making new rifles and component parts on what seems like a daily basis. While it will still take years for the big-bore market to catch up to the .223 Remington./5.56 NATO market, it’s growing a lot faster thanks to companies like Ballistic Advantage.

These barrels are priced between $207 and $261 dollars and they could easily charge more. The most expensive barrel includes a pre-installed low-profile gas block that even further increases its value. The upcoming 12.5-inch barrel will be even cheaper priced at $189.

Ballistic Advantage currently has barrels in 16-, 18- and 20-inch lengths in three profiles, the most conventional being the Tactical Government profile, which is similar to the SOCOM profile used by many AR-15 barrel manufacturers. Next is their heavy profile which features a single taper all the way to the gas block and a straight profile from there.

The barrel that comes with the gas block installed uses the in-house Hanson profile, designed expressly around barrel harmonics. The Hanson profile uses a long taper that runs out to a shoulderless gas block section. Because of this it must be used with a low-pro gas block and a free-floating handguard. The trade-off is improved barrel harmonics which translates to tighter groups downrange.

They are offered in a handful of materials and finishes, as well. The 4150 chrome moly vanadium steel barrels have a quench-polish-quench nitride finish that’s smother and tougher than chrome lining where their 416R stainless steel barrels have a matte bead blasted finish.