Hiperfire is releasing a special Tarheel 3-Gun-edition trigger as a part of the Hipertouch 24 Competition series with a new finish and appreciably smoother trigger pull. And for a touch of flair, the trigger shoe is, naturally, Tar Heel blue. 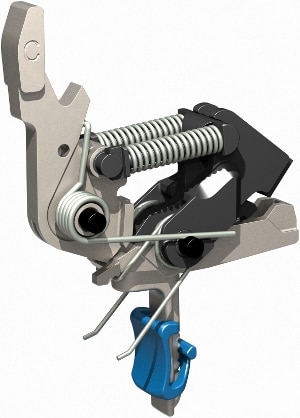 Made at the request of Tarheel 3-Gun to promote themselves and 3-Gun shooting everywhere, the trigger is mechanically the same as the original 24 Competition or 24C trigger but has a slick nickel plating that offers improved corrosion resistance and has a higher natural lubricity than the standard parkerized finish.

Nickle plating is more than just a color change and is an increasingly-popular surface treatment for critical firearm components and the benefits aren’t lost on the trigger components. While the new 24TH trigger has the same mechanical pull weight as the 24C trigger, it has less resistance for a snappier trigger break.

Hiperfire triggers come with a spring kit that let users set their own trigger pull weight and hammer spring weight. The trigger can be set with a 2.5 to 4.5 pound pull and fine-tuned by moving the adjustable trigger shoe for weight and personal preference in trigger finger placement.

It’s a little pricier than Hiperfire’s other trigger groups owing to the more expensive finish and has a suggested retail price of $275. Just the same we expect this trigger’s performance to be worth every penny for precision and long-range shooters. You don’t have to be a Tar Heel or be into 3-Gun to appreciate this new Hiperfire trigger.