'Brady Gun' at auction to support the SAF 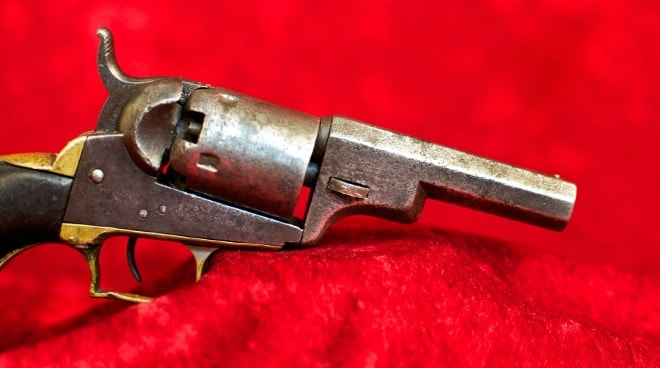 The “Brady Gun,” a Colt Baby Dragoon that can be traced to the Brady family. (Photo: GunLiquidator)

The “Brady Gun,” a 1848 Colt Baby Dragoon Rammerless or 1848 Colt Pocket Pistol, that is thought to have been once owned by gun control advocate James Brady is now up for auction with a part of the proceeds to go to the Second Amendment Foundation.

After Brady was shot by John Hinckley, Jr. during the infamous attempted assassination of President Ronald Regan, his wife, Sarah Brady quickly disposed of all of their firearms including this Colt revolver that wound its way into the hands of collectors. 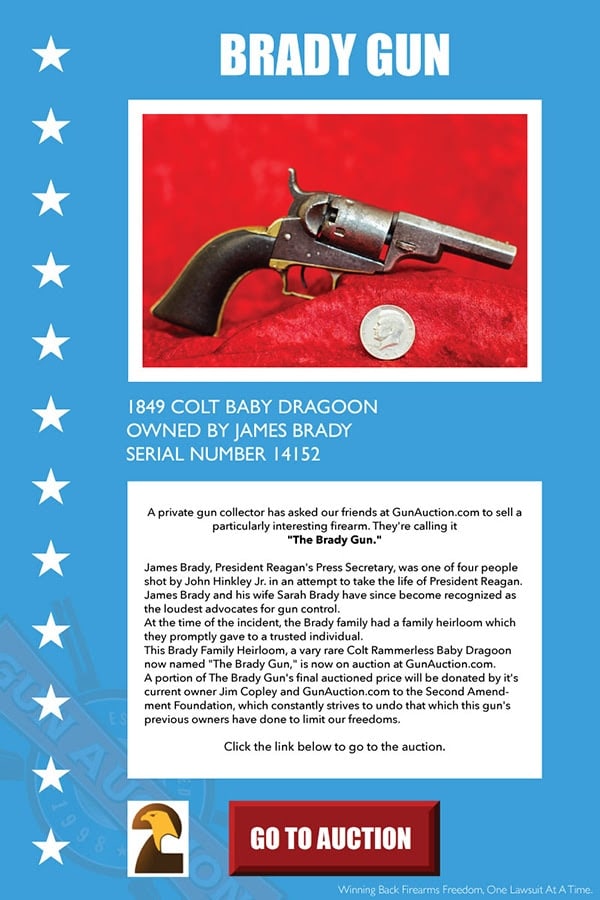 The Colt has passed through several collections until it was acquired by its current owner, Jim Copley, who put it up for auction. The gun’s history has been well-documented and it is an authentic Colt revolver, albeit in not-great condition.

Still, the condition is not really relevant to the value of the pistol — its history is what’s truly valuable as a collector piece, once having belonged to the family now-synonymous with gun control. And because some of the money is going toward the ongoing fight against gun control, collectors will be happy to open their wallets for this.

This particular 1848 Colt Baby Dragoon Rammerless is also thought to be the last of its kind ever made by Colt. The .31-caliber revolver lacks a rammer for loading the chambers, making it a simple, smooth handgun for concealed-carry.

If you’d like to place a bid on this singular handgun or just want to know more about the history of the 1848 Colt Baby Dragoon Rammerless, which is interesting in by its own right, check out the “Brady Gun” Gun Auction listing. There is more than a week left to bid and we expect it to raise a pretty penny for the SAF.

The Second Amendment Foundation mission is “dedicated to promoting a better understanding about our Constitutional heritage to privately own and possess firearms,” and they are well-known for their victories in court overturning gun control laws. They are probably best-known for McDonald v. Chicago which handgun bans were unconstitutional.