In response racially charged shooting at a historic black church in Charleston, South Carolina, the state’s governor announced efforts to remove the controversial Confederate flag from the State House grounds this afternoon.

“The events of this past week call upon us to look at (the flag) in a different way. Fifteen years ago after much contentious debate South Carolina came together in a bipartisan way to move the flag from the top of the Capitol dome. Today we are here in a moment of unity in our state without ill will it’s time to move the flag from the Capitol grounds,” said Gov. Nikki Haley to a cheering audience. 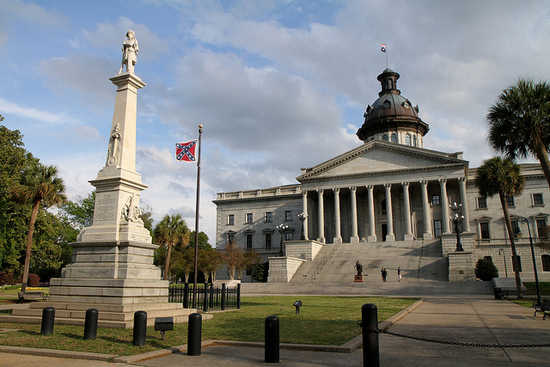 The flag was removed from the Capitol dome 15 years ago, but still flies on the statehouse grounds.

“That flag, while an integral part of our past, does not represent the future of our great state,” she said and added, “My hope is that by removing a symbol that divides us we can move forward as a state in harmony and we can honor the nine blessed souls who are now in heaven.”

She said she is calling for state lawmakers to take up the issue this summer and if they do not, she will use her executive authority to ensure they do debate the issue.

To many outside the state the Confederate flag is a symbol of hate and representative of a losing side in history, but to some in the Palmetto State it stands for the state’s heritage.

Efforts to remove the flag were triggered by last week’s shooting at the Emanuel AME Church in which a white gunman shot and killed nine African-Americans during a prayer group. He hoped the massacre would spark some sort of race war.

Looking into the shooter’s past, a website he allegedly managed contained numerous photos and prose celebrating the Confederate flag and he saw it as representative of his ideals.