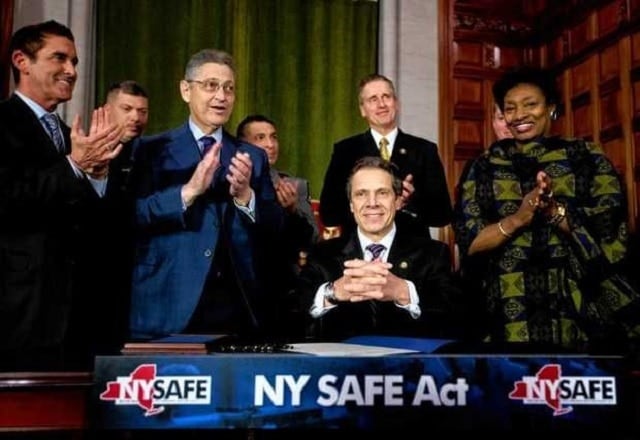 It was estimated that more than a million firearms were classified as “assault weapons” under the 2013 NY SAFE Act, yet two years later less than 45,000 are registered. (Photo: AP)

Information ordered by the courts show that just one out of every 800 New Yorkers have registered their firearms under the requirements of the state’s 2013 gun control legislation.

Records released show that 23,847 people have applied to register 44,485 guns classified as an assault weapon under the egis of the Secure Ammunition Firearms Enforcement Act implemented two years ago. At the time of implementation, it was estimated that as many as 1.2 million guns in the Empire State would have been subject to registration.

With a population of almost 20 million, the seemingly low numbers has Second Amendment activists who sought the data pleased.

Groups on all sides of the issue, however, sought the disclosure.

SAFE Act opponents took the view that few New Yorkers have registered their firearms and the state was keeping a lid on the numbers, especially with an upcoming election cycle, to prevent embarrassment. Gun control advocates looked for the figures to claim a victory in the war on gun violence. First Amendment supporters in the state just wanted to report the facts.

Even the state’s Committee on Open Government, the agency responsible for FOIL information and policy, released an opinion in October saying the state police, while not allowed to release personal information of gun owners, both could, and should release aggregate data such as the number of permit holders and types of firearms registered.

Now with the figures released, it seems that drives by anti-SAFE Act gun owners last year to “register nothing” and burn their registration forms may have had some effect.

“We are opposed to registration because the evidence is clear that registration leads to confiscation,” said NY2A co-founder Jake Palmateer at one such event.

When Canada enacted mandatory firearms registration a decade ago, less than a third of the estimated number of guns in the country were brought in to be counted, leading to labels of massive civil disobedience at the time. Recently, in Connecticut, which has one-fifth the population of New York, just 50,000 guns out of an estimated half million in circulation were registered.

In California, which has cultivated one the nation’s longest running assault weapons registries, similar results have occurred.

In that state, which has some 38 million inhabitants, original estimates in 1989 cited as many as one million possible assault weapons in circulation. By 1990, just 7,000 were registered. Although numbers have increased to over 145,000, this is still nowhere near original estimates, which leads to the inevitable possibility that gun owners did not seek to register their guns.

Meanwhile, Republican lawmakers in the New York legislature are seeking to curb the reach of the SAFE Act.