At the request of a mayoral candidate, one Nashville bar and grill is removing a piece of artwork because some are offended by the content – which includes a curvy lady clad in a Confederate flag bikini bottom.

Charles Robert Bone, who is running for mayor, asked Acme Feed & Seed to take down the piece, which was created by a local artist known as Sheila B., after he came across the anonymously posted Facebook page “Boycott Acme” that featured a photo of Bone set beside of photo of the painting. The caption below read, “This isn’t heritage, it’s just HATE. Tell Mr. Bone the CONFEDERATE FLAG has no place in his restaurants or NASHVILLE.”

The establishment is a popular tourist stop, with over 500 historical pieces displayed. Nonetheless, Acme’s owner, Tom Morales, who called the artwork a “satirical commentary on Southern culture,” said in a statement Saturday, “In light of the recent events, Acme Feed & Seed has removed the piece of artwork so as not to confuse anyone about Acme’s, our investors’ and our supporters’ commitment to all people of Nashville.”

Sheila B. apparently has her work, which is described as “renowned ‘tongue in cheek’ collections,” featured at the Ryman Auditorium, the Gaylord Opryland Hotel and the Tennessee State Museum. She believes the pin-up style painting doesn’t quite mean what some think it does.

“Anyone that has a vision, and not a set of blinders on, can view my artwork and see that there is a message that is not divisive,” she said. “I have a message of inclusion. It is social commentary, and anyone seeing my work as anything other than opposing a divisive culture is delusional and shit-stirring at best.”

Ironically, the caption painted below the Confederate bikini booty, which happens to be cropped out, states, “Every kind-hearted soul welcome! Mean folks stay away.” 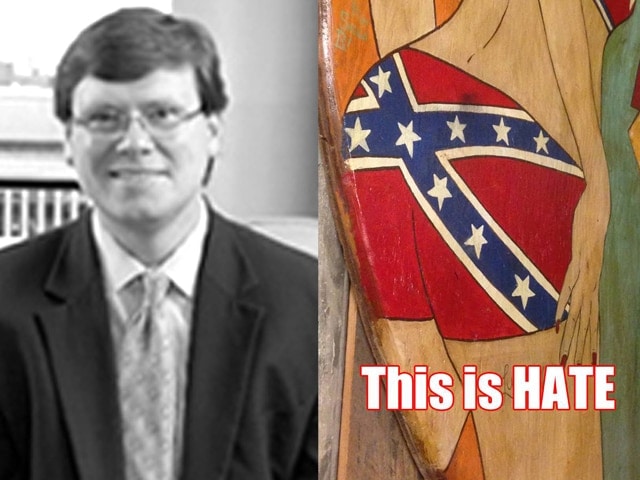