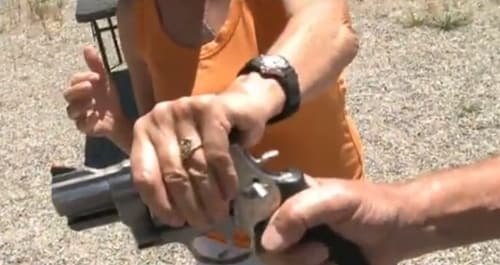 Geof Peabody doesn’t just show how to hit the target, he teaches how to disarm a threat. (Photo: ABC)

The owner of a gun range in Placerville, California, offers firearm training to many individuals, including pastors and other clergy members, but says while the interest has increased after the shooting at a church in Charleston, South Carolina, last week, the idea of pistol packing preachers is nothing new.

Gun training at Peabody’s Shooting Range begins in the classroom, where participants learn all about safety before ever handling a firearm. After classroom instruction comes range time where members of the class have the opportunity to try out over a dozen different models of revolvers and semi-automatic handguns of differing calibers.

Range owner and NRA certified instructor Geof Peabody has been teaching firearms classes for more than seven years. He has already trained over 400 ministers, but his training isn’t just for clergy. According to his website, his courses are offered for women, as well as youth and children.

Debbie Caudle told a local ABC affiliate that she had never even held a handgun before attending one of Peabody’s classes, but said she now feels that it is a necessary tool for protection.

“We need it in our church, in our businesses,” she said.

Caudle also said she wanted to be comfortable with carrying a gun though, something Peabody strives to achieve in his classes, along with other important skills for self-defense. In fact, Peabody doesn’t just teach those in attendance how to hit the target, he teaches them techniques for interfering with the operation of a firearm held by an attacker.

But despite the popularity of the classes, Peabody said not all clergy – or even Christians in general – support others carrying guns or even the idea of firearms at all. However, Peabody, who is obviously pro-gun, includes a link on his website to an in-depth study about self-defense from a Biblical viewpoint.

Still, others believe that guns are only a tool and ultimately it’s an individual’s heart that has the potential to be bad, not the inanimate object itself.

“Firearms are just firearms,” said Cavalry Chapel Senior Pastor Dominic Triveri. “And what is done with them is up to the individuals who use them.”