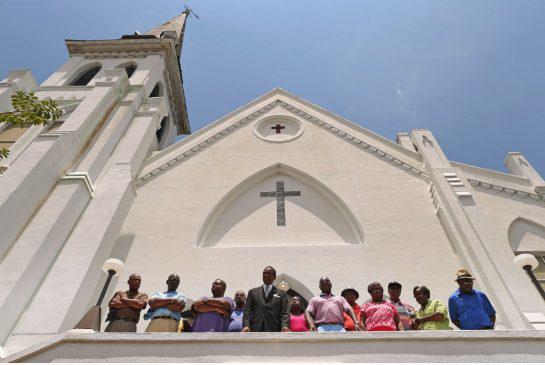 Members of the Emanuel AME Church stand outside the church Saturday to announce that services and Sunday school will go as scheduled. (Photo: Getty Images)

The brutal mass shooting at a church in Charleston, South Carolina, last week has once again churned up a push for more comprehensive federal gun control.

Everytown for Gun Safety and Moms Demand Action for Gun Sense in America on Tuesday called for expanded background checks on all gun sales.

“The tragedy in Charleston is a reminder that most violent attacks on religious institutions in the U.S. now involve firearms and every day, 88 Americans are killed by gun violence,” said John Feinblatt, president of Everytown for Gun Safety, in a statement. “The most important policy step that we can take to reduce this unacceptable level of gun violence is to expand the background check system to cover all gun sales.”

It’s unclear which firearm was used during the church massacre in which nine black people were gunned down by the white shooter – a .45-caliber handgun given to the gunman by his father on his 21st birthday in April or another he reportedly purchased on his own, which required him to submit to a background check he ultimately passed despite a misdemeanor drug possession arrest some four months prior to the shooting.

“It’s true that more background checks won’t stop every tragedy. But we know it will stop some,” said Sen. Pat Toomey, R-Pa., who expressed an interest in renewing efforts to pass national gun control legislation.

Although mass shootings get the most media attention, it’s not how most people are killed in this country, Erika Lamb, spokesperson for Everytown, told Guns.com in an email.

“We believe that tragedies like what happened in Charleston last week raises awareness of the overall gun violence problem in our country — the 88 Americans killed every day and hundreds more injured — and that we should focus on the policy fix that will have the most impact in saving lives which is … keeping guns out of dangerous hands by requiring background checks on all sales,” Lamb said.

This article was updated to include further comment from Everytown about how the Charleston shooter obtained his firearms.