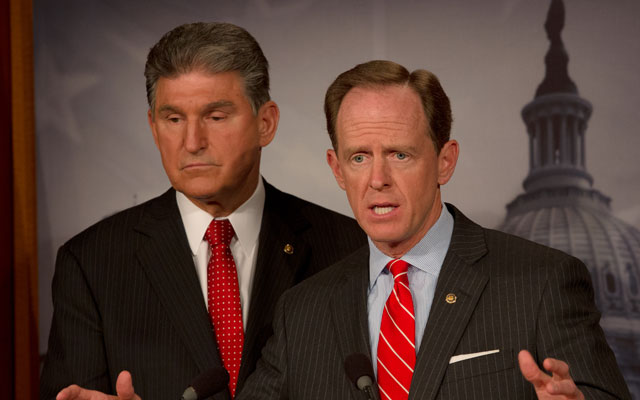 Following on the heels of a mass shooting last week, Sen. Pat Toomey, R-Pa., and Sen. Joe Manchin, D-W.Va., expressed this week that the time might be right to renew old efforts at gun control.

The bipartisan lawmakers in 2013 spearheaded a push to expand background checks nationwide to include virtually all private sales. That effort saw a narrow defeat and a resulting campaign to unseat moderate congressional incumbents that supported its passage.

Now, even with the tables turned in leadership of the Senate, Manchin and Toomey remarked at a fundraising dinner for Sandy Hook Promise in Washington D.C. Tuesday night that background checks should still be on the table.

“I’m convinced that more background checks will save lives,” said Toomey, who accepted an award from the group.

Although scheduled months before last week’s tragic events in Charleston, South Carolina – where nine churchgoers and clergy were killed in a reportedly racist attack by a gunman who lawfully obtained his firearm after a passing a background check despite having a misdemeanor drug arrest two months prior – the specter of the Emanuel Church assault loomed over the event.

The original 2013 eponymous proposal by the lawmakers would have expanded background checks to cover sales between private parties that occur over the Internet and at gun shows. In the end, it failed in the Senate by a vote of 54-46, including five Democrats. This led to condemnation from President Obama who at the time said Republicans and the National Rifle Association had “willfully lied” about the sweep of the legislation.

Meanwhile, at a reception before Tuesday’s event Manchin also brought up the prospect of dusting off background checks. He said that, while he has not spoken with his GOP counterpart in the previous background check legislation, a renewed effort would depend on if they could count on 60 votes in the Senate this time around.

“We want to make sure we have the votes. Pat’s going to have to, and I’ll work with him, to get some of our colleagues on the Republican side,” Manchin said.

Gun rights advocates feel the chances for a successful return of the legislation to be unlikely.

“Just like the last version that failed, the leadership of Obama’s party will will not allow a background check  to advance that will have the concessions to protect the rights of gun owners that would be needed to gain acceptance for passage,” Alan Gottlieb, chairman of the Citizens Committee for the Right to Keep and Bear Arms, told Guns.com Wednesday.

“Senators Harry Reid and Chuck Schumer will not allow provisions that could make any background check proposal acceptable to us,” predicted Gottlieb.

This is not the first time that the ghost of the Manchin-Toomey amendment has been conjured up in the aftermath of a mass killing. Last year a group of Senate Democrats attempted to renew the call for universal background checks following the spree killing in California that left six dead and 19 injured.