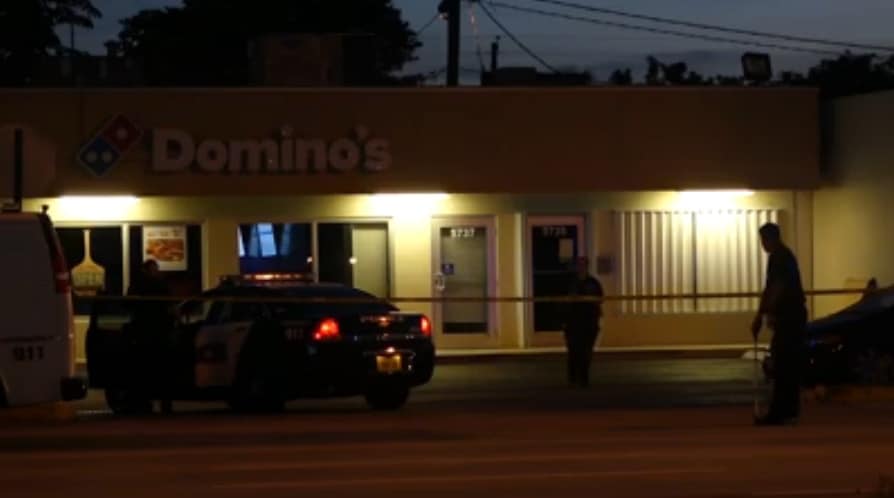 The restaurant had closed just before 1:00 a.m. when the attempted robbery occurred in the parking lot. (Photo: NBC)

A pizza delivery guy shot and killed one of two would-be robbers in the parking lot of a Domino’s restaurant in Hollywood, Florida, early Wednesday morning.

Several reports indicate 24-year-old Slayde Henry was targeted for a robbery after being approached by two males, who according to Hollywood Police Officer Meredith Elrich were dressed in dark clothing and possibly armed with a weapon. However, instead of pulling out cash, Henry grabbed his gun and opened fire on the suspects. Witnesses told reporters Henry fired six shots, although authorities have not confirmed this.

One suspect was shot, while the other fled the scene, leaving his bleeding comrade behind. The wounded suspect, who was later identified as 24-year-old Aldaberto Hernandez, was pronounced dead at the scene. Henry was uninjured.

Authorities used helicopters, K-9 units and other resources in an attempt to locate the second suspect, but their efforts were unsuccessful. A bullet hole-riddled car was towed from the parking lot, although it’s unknown who owned the vehicle.

Henry’s co-workers, although surprised to find out he was carrying a gun, think he acted appropriately.

“Obviously his life was threatened or he felt that it was threatened,” Daniel Tymecki, who works with Henry, told CBS Miami. “It’s kinda sad, really, that he had to do that. Especially since he has a family.”

But apparently Henry didn’t just protect himself either. Miguel Nieves said his girlfriend’s daughter works at the same Domino’s and just stepped out of the back door when the attempted robbery occurred.

Corporate spokesman for Domino’s, Tim McIntyre, later said in a statement, “As do all national pizza delivery companies, we do have a no-weapons policy at our company-owned stores,” the Sun-Sentinel reported.

McIntyre did not indicate whether Henry would face disciplinary action for ignoring the policy, a move which could have saved his life, but did say they are grateful he was unharmed and they are cooperating with authorities during the investigation.

In a similar incident, a delivery driver for a Papa John’s in Dekalb County, Georgia, did not face disciplinary action after she too ignored the company’s no weapons policy and carried a gun to work. In January, she was targeted for a robbery and escaped the violent encounter only after she shot her attacker in the face.

In March, a 36-year-old father of three wasn’t as fortunate when he was fatally shot in New Orleans during an apparent robbery while on his way to a make a delivery for Domino’s. Management confirmed that, as is standard policy, Michael Price was only carrying less than $20 at the time.

Delivery drivers have increasingly been targeted for robberies, prompting some businesses to amend their policies to only deliver at certain times, and others to implement policies requiring two employees – one of whom is always armed – to go out on deliveries.

Henry’s family said he is still distraught over Wednesday’s ordeal and does not wish to speak with the media.