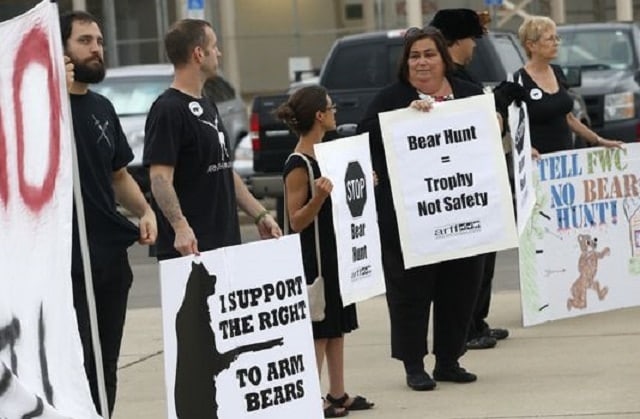 The Florida Fish and Wildlife Conservation Commission on Thursday voted to include hunting as a means to help control the state’s exploding population of black bear.

Florida’s first bear hunting season this century will open Oct. 24 and could run as long as seven days ending on Oct. 30, depending on if a harvest objective is met.

The Commission faced intense opposition from anti-hunting groups spearheaded by the Humane Society of the United States in recent months who embarked on a campaign that included petitions and pickets.

Even with hunting now on the table, the Commissioners asked that FWC continue focusing on educating people about the repercussions of feeding bears and how to co-exist with bears to minimize conflicts.

“The FWC will continue to perform its role to educate the public, provide technical assistance, remove conflict bears, manage bear populations, and enforce feeding prohibitions,” said Dr. Thomas Eason, director of FWC’s Division of Habitat and Species Conservation, in a statement emailed to Guns.com. “The problem of unsecured waste needs to be addressed by bringing together local officials, along with waste service companies, to work together with FWC to resolve this problem in a cost-effective manner.”

The season will take place in four of the FWC’s seven Bear Management Units across 40 counties for which special-use bear permits would be issued at a cost of $100 apiece for residents. The season would vary between units, with some just set for two-day hunts while others could see a full week. No bait or dogs can be used while animals harvested must be mature and ideally over 100 pounds in weight.

The HSUS was quick to decry Wednesday’s vote.

“By sanctioning a trophy hunt on bears in lieu of effective solutions on human-bear conflicts, the FWC has ignored sound science, responsible wildlife management and the majority of Floridians who oppose a hunt on this highly vulnerable and rare sub-species of bear, found nowhere else in the world outside its range,” said Kate MacFall, Florida state director for HSUS in a statement.

MacFall cautioned FWC may include the use of dogs and bait later.

“We will continue to oppose this hunt, not only because it is unjustified, but also because it is likely that cruel and inhumane practices like hounding and baiting will be added in the near future,” she said.

The move by FWC did meet with approval from gun rights advocates in the state.

“Fortunately, most of the members and staff of the FWC conduct themselves professionally and are not easily diverted from doing their jobs by the emotional dialogue and personal verbal attacks on Commissioners and staff by animal rights activists,” Marion Hammer, president of the Unified Sportsmen of Florida and past president of the National Rifle Association, told Guns.com Thursday.

“Utilizing hunting as a wildlife population control tool is proven to be effective and is consistent with doing their job as managers of our state’s wildlife and natural resources,” said Hammer.