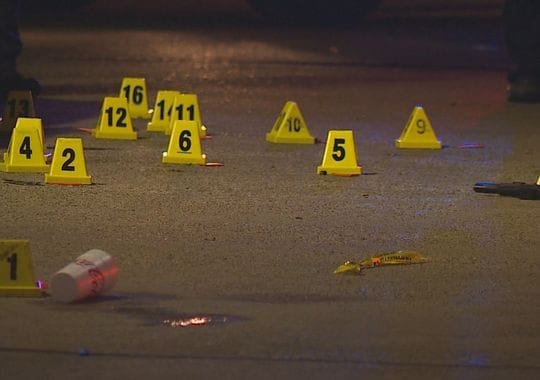 Authorities did not confirm how many shots were fired, but several bullet casing were marked at the scene. (Photo: WFAA)

One man is dead and another man is recovering from a gunshot wound after the intended target of a robbery outside of a Dallas restaurant over the weekend turned the tables on his attacker.

The Dallas Morning News reported the two victims were walking to a newer model white Chevy Camaro outside of a Benihana restaurant just after 10 p.m. Sunday when they were approached by a man who asked for a lighter. But immediately after the request, the suspect put on a mask and pulled a gun from his waistband.

However, one of the victims had already sensed that something was awry with the man and grabbed his own gun from inside the parked car. An exchange of gunfire ensued, and both men were shot.

Security guard Jesus Penaloza responded when he heard the gunshots. He told a local CBS affiliate that he was patrolling the parking lot in a golf cart and heard six to eight shots, although police have not confirmed the number of shots that were fired.

Initial reports indicated a second suspect was involved and still at large, but police later confirmed that was not the case and the single suspect was believed to have acted alone.

Authorities did not say whether the armed victim had a concealed carry permit, but no charges have been filed against him.

The restaurant reopened as usual the following day and did not provide a statement or comment concerning the incident.