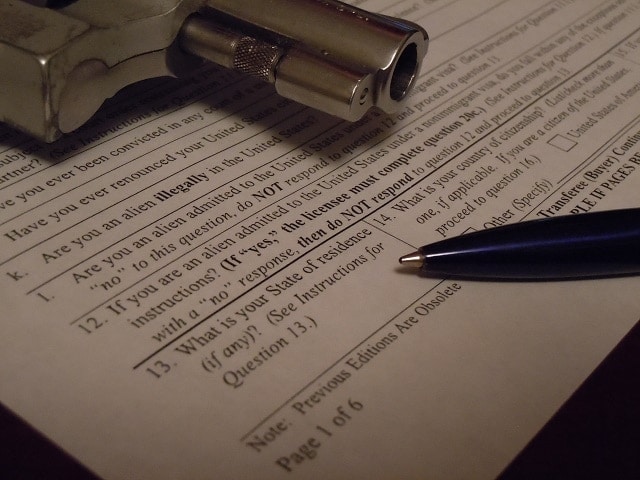 A federal appeals court breathed new life into a case challenging the ban on gun sales to Americans living abroad.

The case, Dearth v. Lynch, takes up the argument of Canadian resident Stephen Dearth that was ruled against previously by a U.S. District Court.

Dearth, a natural born U.S. citizen who lives in Winnipeg, Manitoba, and has no stateside residence is unable to acquire firearms as he cannot answer question 13 on the Bureau of Alcohol, Tobacco, Firearms and Explosives Form 4473, which asks, “What is your State of residence?”

Therefore, on two visits to the U.S. in 2006 and 2007 Dearth was refused the opportunity to purchase firearms.

The plaintiff originally filed suit in 2009 and has been argued at the appellate level several times since then before the U.S. Court of Appeals for the District of Columbia Circuit agreed this week the case should be heard.

“Here there are too many unanswered questions regarding Dearth’s particular situation even though he seeks to mount an as applied challenge,” Judge A. Raymond Randolph wrote for panel’s 2-1 majority. Judge Thomas Griffith joined Randolph in his decision.

President George W. Bush appointed all members of the panel.

Dissenting was Judge Karen Henderson who stated in part, “The government has demonstrated that the challenged provisions are tailored to the specific interests identified: preventing international firearms trafficking and circumvention of state firearms regulations.”

The case was led by noted Heller attorney Alan Gura and backed by the Second Amendment Foundation who welcomed the news that the case was moving forward after being dormant for so long.

“A statute that prevents a law-abiding citizen from exercising his or her Second Amendment rights while back on U.S. soil, no matter where they happen to be living, needs to be challenged,” said SAF founder and Executive Vice President Alan Gottlieb in a statement.

“When Mr. Dearth is allowed to present his case, we’re confident the court will agree that his rights as a citizen are being violated simply because of his mailing address,” he said.