Meet the Kivaari, a semi-auto takedown rifle in .338 LM 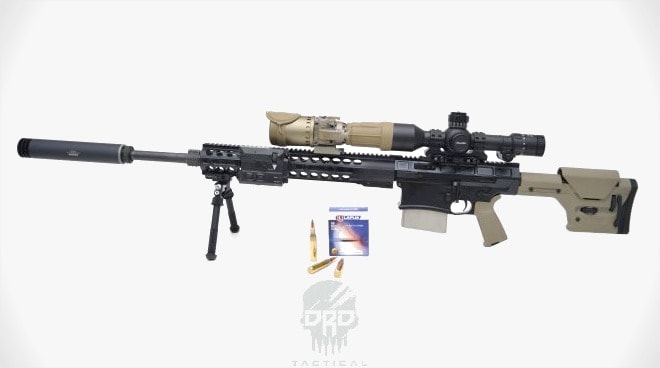 This powerhouse of a cartridge is taking the lead in long-range shooting sports, hunting, and military and law enforcement users. The Kivaari enables users to pack in a rifle in a discreet pack or bag, and assemble it when they get into position. Takedown rifles are also handy for hunting as they can be transported without snagging on brush and branches.

The Kivaari uses DRD Tactical’s patented quick change barrel system and assembles and disassembles in seconds. The barrel and attached gas tube drop into place and the user cinches down an oversized barrel nut by hand. The handguard then clamps down over the nut and locks everything into place.

The Kivaari is equipped with a 24-inch barrel which is long enough to take advantage of the powerful magnum cartridge while still compact enough to disassemble into a pack or hard case. The clamping system lets the handguard free-float for repeatable 1-MOA accuracy, which is critical for a long-range rifle.

The Kivaari has a fully-adjustable Magpul PRS stock and matching Magpul pistol grip. The handguard is an in-house modular design that accepts rail sections for accessories and the rifle feed from 10-round box magazines. The muzzle brake is by SilencerCo for use with quick-detach suppressors.

The Kivaari is offered in black and flat dark earth. (Photo: Euro Optic)

DRD offers the Kivaari in black and flat dark earth color schemes with user’s choice in packaging, either a Tactical Taylor Trekker backpack or a custom hard case. All options are priced at $6,900 which is no small chunk of change.

But it’s not as if there aren’t more expensive .338 Lapua rifles on the market, and nothing else quite like the Kivaari. This gun has a cool factor that’s off the charts, and you don’t have to be a professional counter-sniper to appreciate it.

And if you don’t need a .338 magnum rifle DRD Tactical offers a choice selection of more affordable, albeit less powerful rifles. While the Paratus is similarly-priced at $6,000 their 5.56 NATO and 300 AAC Blackout rifles start at a relatively low-priced $2,090.