Got PDW? Introducing the UHP15PDW for SBRs 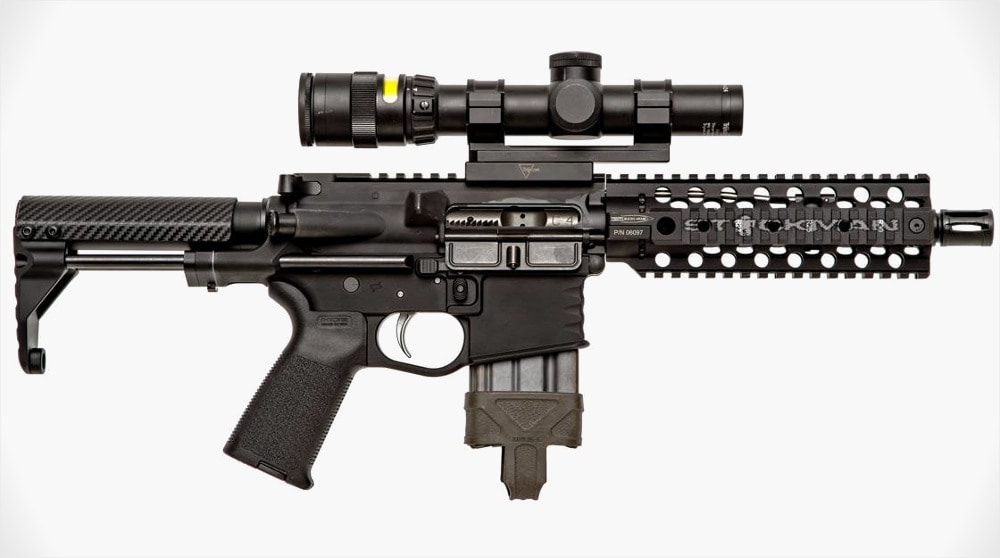 The UHP15PDW assembled into a PDW-style SBR. The stock is collapsed. (Photo: Stickman)

Rainier Arms is taking orders for the UHP15PDW, a compact, integrally-stocked totally bad ass AR-15-based lower for short-barreled rifles and personal defense weapon-style builds. The lower — that has a lot of neat features going for it — is a joint effort by Cross Machine Tool and Battle Arms Development.

The lower was designed from the ground around an all-new buffer and stock assembly. The stock mounts directly to the receiver on a pair of telescoping arms and collapses down almost 2 inches shorter than a standard carbine lower and stock.

The stock consists of a machined aluminum buttplate and molded carbon fiber cheekpiece that while small, get the job done. Most other “bolt on” skeleton stocks don’t offer any real cheek support at all. It’s a four-position stock with a quick-detach sling swivel point at the center of the stock’s toe. The adjustment latch is on the rear of the receiver underneath the buffer tube in an ambidextrous position. 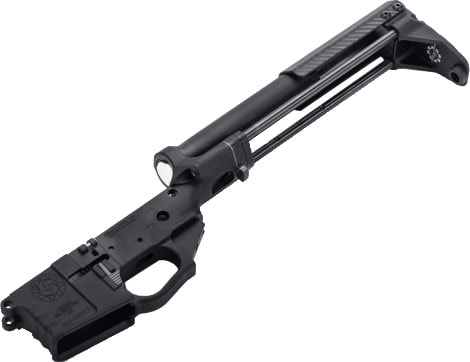 The Battle Arms Development influence is pretty visible with the ambidextrous controls. The selector marks are compatible with short-throw safeties like Battle Arms’ own BAD-ASS modular safety selectors. The rest of the controls a fully-ambidextrous as well, including the bolt and magazine release levers.

All the small parts including the ambidextrous levers have a black nitride finish, which is harder and smoother than parkerization. It’s a small touch and a lot of people wouldn’t notice it but it’s there.

Like a lot of non-standard receivers the UHP15PDW is CNC machined from 7075-T6 alloy aluminum and sports a MIL-SPEC hard anodized finish. The holes are reamed for improved concentricity and the magazine well is wire-EDM cut for precision. The mag well is slightly flared for faster, more reliable reloads.

Another advantage of the UHP15PDW is that it’s lightweight. PDW stocks on ARs trade length for bulk and can add a lot of weight to the firearm. The complete UHP15PDW lower weighs 2.25 pounds which is in-line with a standard AR lower complete with A2-style furniture.

Here comes the hard part, the sticker. The UHP15PDW is on sale for $625, which makes it expensive even by premium component standards. Even still, with it’s features and fully-functioning PDW stock we’re sure Rainier Arms will have no problems moving them. It’s important to remember that these are near-complete lowers minus the pistol grip, right-side (standard) magazine release button and fire control group.

For now the UHP15PDW lower receiver stands out as one of the most promising new PDW options on the AR-15 market. It may cost a little more than the alternatives but it doesn’t cut any corners and offers more than most at the same time.