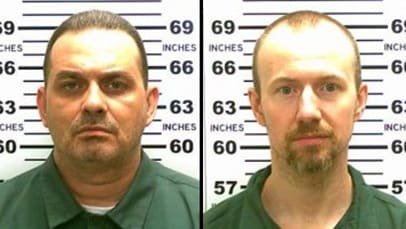 After more than three weeks, the search for two convicted murderers who escaped from a New York prison has come to an end. David Sweat was captured Sunday, two days after his accomplice, Richard Matt, was shot and killed by authorities a few miles from the Canadian border.

“The nightmare is finally over,” said New York Gov. Andrew Cuomo. “We wish it didn’t happen in the first place. But if you have to have it happen, this is how you want it to end.”

New York State Police Sgt. Jay Cook, who was searching alone at the time, apparently noticed Sweat in Constable, New York, less than 20 miles from the Canadian border and about 16 miles north of where Matt was killed. Sweat attempted to flee, but Cook pursued him.

“At some point, running across a field, he realized that Sweat was going to make it to a tree line, and possibly could have disappeared, and he fired two shots,” New York State Police Superintendent Joseph A. D’Amico told reporters.

Sweat was shot twice in the torso and transported to the hospital where he was last listed in critical condition. A team made up of emergency, trauma, intensive care, radiology and vascular specialists are working to keep Sweat alive, and since he has been apprehended, authorities are hoping he will survive.

“Now that we have Mr. Sweat, it gives us the opportunity to have some more questions and provide more facts on the overall situation,” Gov. Cuomo said. “Anyone who we find who was culpable and guilty of cooperating in the escape will be fully prosecuted.”

On Friday afternoon around 3:45 p.m., Matt was shot and killed by a U.S. Customs and Border Patrol officer in Malone, New York, about 30 miles from the Clinton Correctional Facility where the duo escaped earlier this month. USA Today reported Matt was armed with a shotgun, which authorities believe he stole from an unoccupied hunting cabin near Black Cat Mountain.

“Officers verbally challenged him, told him to put up his hands,” D’Amico said. “When he did not comply, he was shot.”

Sweat and Matt were discovered missing from the correctional facility on June 6 during a routine bed check. Authorities, who believe the men may have been planning the escape for a year, later determined a tailor and a guard working at the prison helped to provide the men with the power tools they used to cut through a steel wall, pipes and bricks within the prison’s walls. They then made their way through a two-foot-wide pipe and out to a manhole in the street outside of the prison’s 30-foot exterior walls.

It was the first successful escape in the prison’s 150-year history.

Sweat was serving a life sentence for the July 2002 brutal killing of Broome County sheriff’s deputy Kevin Tarsia, who was shot 15 times before being ran over. Matt was serving 25 years to life for the kidnapping and dismemberment of his former boss, William Rickerson.

Authorities believe that after their escape, the men used pepper to cover their scent and throw off the search dogs.