Obama calls on supporters to back gun control 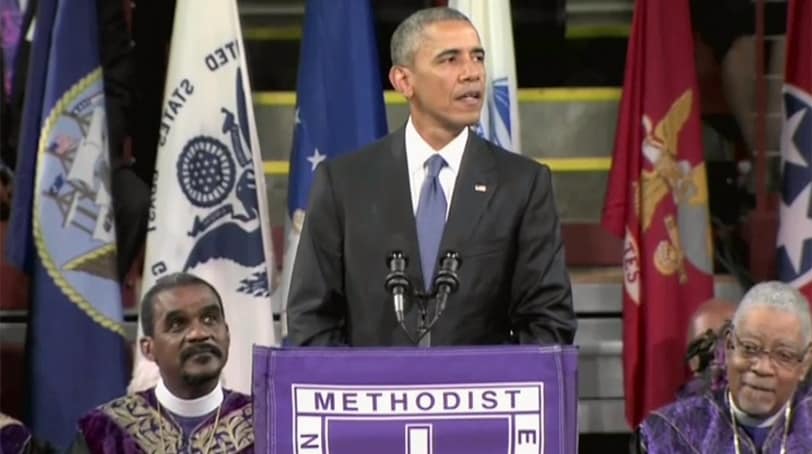 Following his Friday eulogizing of the victims of a brutal mass shooting at a church in Charleston, South Carolina, two weeks ago, President Barack Obama on Sunday called on supporters to rally behind him in implementing more gun control in the country.

“We’ve had to come together as a nation too many times to mourn after horrific acts of gun violence,” Obama said in a statement. “And right now, it’s not good enough simply to show sympathy.”

The president said mass shootings are becoming commonplace and that the country mustn’t become complacent in talking about tragic acts of gun violence like the one that claimed the lives of nine people at an evening Bible study at the Emanuel African Methodist Episcopal Church on June 17.

“People across the country are stepping up, and OFA supporters and volunteers are working to prevent gun violence state by state and city by city,” Obama said.

The president expressed his frustration with Congress’ lack of support in passing so-called common-sense gun reform and lauded efforts by community organizers to bypass the political gridlock.

“[T]heir refusal to act won’t stop progress,” Obama said. “Because of organizers like you, states like Washington and Oregon have introduced successful restrictions on gun purchases, like common-sense background checks.”

Oregon passed its gun control law in May, requiring most firearms transfers be scrutinized by a background check. Washington in November passed its background check law by an almost 60 percent popular vote after initiative I-594 was introduced. The measure was backed by gun control group Everytown for Gun Safety, which spent more than $4 million in supporting it.

Obama’s message came through an email sent on behalf of Organizing for Action, a group which morphed in 2013 from the president’s campaign committee, Obama for America.

“No single reform will eliminate violence,” Obama said. “But we can’t give up, or act like this is some kind of new normal. We have to make progress where we can, and OFA and other groups have a real path forward.”