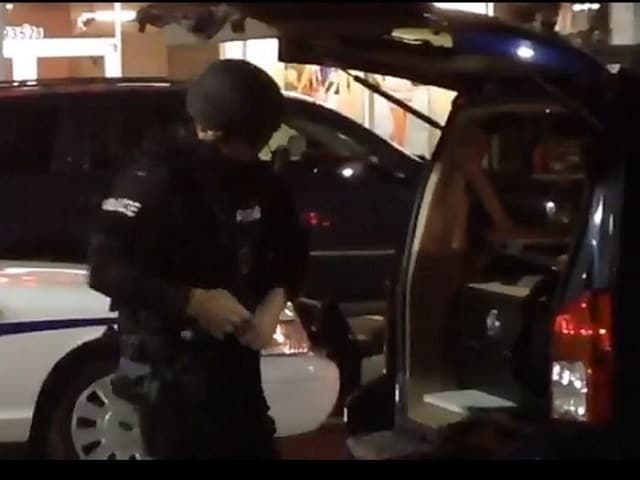 The Gulfport Police SWAT team was deployed last weekend to an evacuated Wal-Mart in response to an open carry practitioner allegedly loading and racking a shotgun in front of witnesses in the store. (Photo: WLOX)

Two Mississippi men had the long arm of the law reach out for them following an incident while open carrying that led to the evacuation of a Wal-Mart.

According to Gulfport Police Chief Leonard Papania, Saucier was lawfully open carrying a shotgun in a number of businesses the night of June 21 to include a Krispy Kreme, a supermarket, and a Wal-Mart location. In the latter, Saucier allegedly loaded and chambered the gun in front of shoppers, prompting frantic calls to police and an evacuation of the retail outlet.

“If I were in a situation where I’m in the store shopping with my family and I see an individual loading a 12 gauge, and racking it, I’m not coming to the conclusion this is good,” said Papania. “While the actions of these two men are sanctioned by state laws, what they did negatively impacted our community.”

While not initially charged, warrants were issued five days later and the teens were arrested.

Mississippi passed an open carry law in 2013 that allowed for the practice without a permit in most places that do not specifically post signage prohibiting firearms. As noted by Papania, none of the three businesses had such signs posted and the men are only facing charges stemming from loading the shotgun inside Wal-Mart.

Open carry advocates defended the practice as a whole when performed correctly.

“Open carry is a matter of being able to carry in self-defense,” CJ Grisham, president of Open Carry Texas, told Guns.com Saturday. “It is also a great way to train the public not to fear properly handled or holstered firearms.”

However, Grisham cautioned Guns.com that the behavior of the two teens likely crossed a line.

“What they did was irresponsible, unsafe, and plain stupid. There is no reason to load a firearm in public unless you are about to use it,” said Grisham.

“When a gun owner racks and stacks ammunition, this is certain to cause alarm and, I would argue, even meets the definition of Mississippi’s ‘disorderly conduct’ statute. Had anyone been armed in the immediately vicinity of this incident, those individuals would have been well within their rights to draw down on the open carriers at a minimum,” Grisham said.

Municipal Judge Fant Walker on Saucier set Bond at $1,054.50 and Walker for $677.25, both of which posted to obtain release pending trial.