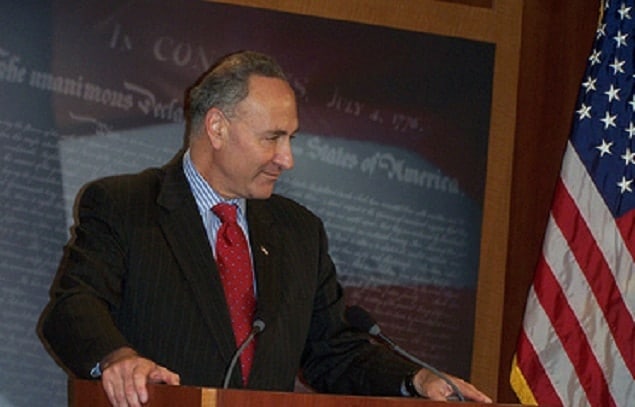 Sen. Chuck Schumer is saddling up for a gun control ride through the Senate. (Photo: schumer.senate.gov)

U.S. Sen. Chuck Schumer, D-N.Y., is calling for a host of new measures from background checks to magazine bans in the wake of the attack on Emanuel AME Church in South Carolina.

The senior senator from New York announced he would help lead a charge to mandate Brady-style background checks on private gun sales, limit sales of some types of magazines and increase reporting of those prohibited from possessing firearms from states to the federal database.

Schumer, recently endorsed to succeed Sen. Harry Reid as Senate Democratic Leader and author of the 1993 bill that brought mandatory background checks to over-the-counter sales, cited the recent mass killing in Charleston as a reason to renew the push for gun control.

“If there is anything that the massacres in South Carolina, Newtown, Virginia Tech, Aurora and so many other places have taught us, it’s that we should be doing everything in our power to prevent weapons from falling into the hands of hateful, evil-doers and the mentally disturbed,” Schumer said in a statement Monday. “It makes no difference when guns are sold or who are selling them – we must prevent deadly weapons from falling into the wrong hands.”

“I acknowledge the right – enshrined in the Second Amendment and the Heller decision – of American citizens to purchase and bear arms, however, just as the First Amendment comes with responsibilities and limits to protect public safety, the Second Amendment does as well. We have to make sure that we as a country are safe and that everyone’s right are respected,” he said.

First on Schumer’s list is to close the so-called gun show loophole and require Brady checks on virtually all private sales.

Next, he proposes states increase and expand reporting of those adjudicated mentally ill or convicted of a violent crime and do so more quickly.

Finally, a statement from his office explained that Schumer would also help champion “banning those on the terrorist watch list from purchasing guns, prohibiting large capacity magazines, and allowing the CDC to research the ways to prevent gun violence.”

While Schumer admitted the events in South Carolina are still being investigated and it is unclear if stricter gun laws would have prevented the killer from shooting up Emanuel African Methodist Episcopal Church in Charleston on June 17, he contends that such events occur all too frequently.

“Our children have seen far too many tragedies in the country involving guns and weapons, and now is the time to put forth real, effective common sense gun safety measures that can save future innocent lives from being taken, without taking away any existing rights,” Schumer said.

This is not the first time this year that Schumer has appeared in the wake of a high-profile murder to decry the availability of guns and propose increased regulation.

In May, he responded to the killing of a New York police officer with a stolen gun with a proposed repeal of the Tiahrt amendments, which prohibits the Bureau of Alcohol, Tobacco, Firearms and Explosives from sharing its gun trace data with local law enforcement and the public as well as move to name a director to the agency.

“I’m convinced that more background checks will save lives,” Toomey said last Wednesday at a dinner for Sandy Hook Promise.