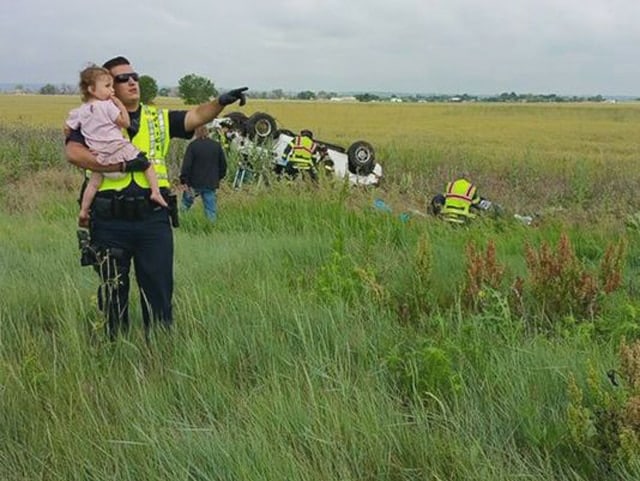 Jessica Matrious was driving down a Colorado highway when she witnessed a nearby SUV have a blowout and consequently lose control. The six occupants of the vehicle – a mother, father and four children – were thrown from the car.

As first responders arrived on the scene, she captured video with her cell phone, but what she didn’t expect was to capture an emotional image of an officer with one of the young survivors.

Brighton Police Officer Nick Struck was the third to arrive on the scene.

“When you hear that there’s children involved… you get that pit in your stomach,” Struck said.

He explained that part of their job is to try to comfort anybody on the scene of a crash, and if there are kids, they always come first.

As Struck walked upon the scene, he was handed a 2-year-old girl. Her mother and three siblings had been injured in the one-vehicle accident. The young girl’s father was killed.

Struck, who also has a 2-year-old daughter, said he thought to himself about what he would want someone to do if that were his own daughter.

So Struck walked away from the car, with the little girl on his hip, and began to sing “Twinkle Twinkle Little Star.”

“I know for my daughter, it’s just the attention that someone is there, listening. It’s the same for adults, but kids, they take it on a whole other level,” Struck said. “They’ll gravitate to you, and I remember when I was holding her, she was grabbing the back of my arm, which is something my daughter does. Just stroking to the music, ‘twinkle, twinkle.’”

Struck said he may not have been able to provide medical care, but he was able to give a hug when it was needed instead. And at the end of the day, he said he didn’t do anything any different than anybody else would have.

“You better believe every one of those officers on scene would do the same thing,” he said.

The accident is still under investigation, but according to authorities, none of the occupants of the vehicle were properly restrained.