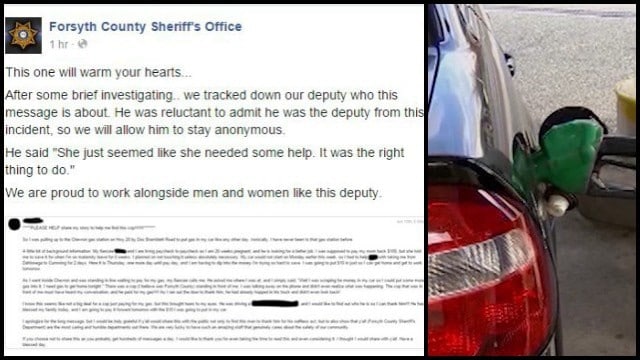 A young lady in Forsyth County, Georgia, was recently touched by a sheriff deputy’s random act of kindness and took to social media in an attempt to track down the officer and thank him.

Alex Davis, who is seven months pregnant, stopped at a Chevron she had never used before to put a little gas in her car. While standing in line, she was on the phone with her fiance explaining that she had to use $10 from the $100 she was supposed to give her mother because it was still one more day until payday and she had no money and no gas to get home.

Unbeknown to Davis, the deputy standing in line in front of her overheard the conversation and paid for the $10 worth of gas for her. By the time the clerk told Davis what he had done, the deputy had already driven away. Davis was left in tears at the seemingly small gesture and the fact that she had no way to thank the man who blessed her family that day. After noting what type of vehicle the deputy was driving, she sent out a message on social media to the sheriff’s department.

Eventually, the Forsyth County Sheriff’s Office figured out which deputy was responsible for the good deed and added a post to their Facebook page which read:

This one will warm your hearts

After some brief investigating.. we tracked down our deputy who this message is about. He was reluctant to admit he was the deputy from this incident, so we will allow him to stay anonymous.

He said, “She just seemed like she needed some help. It was the right thing to do.”

We are proud to work alongside men and women like this deputy.

After getting her paycheck the following day, Davis took $10 and paid it forward to someone else.