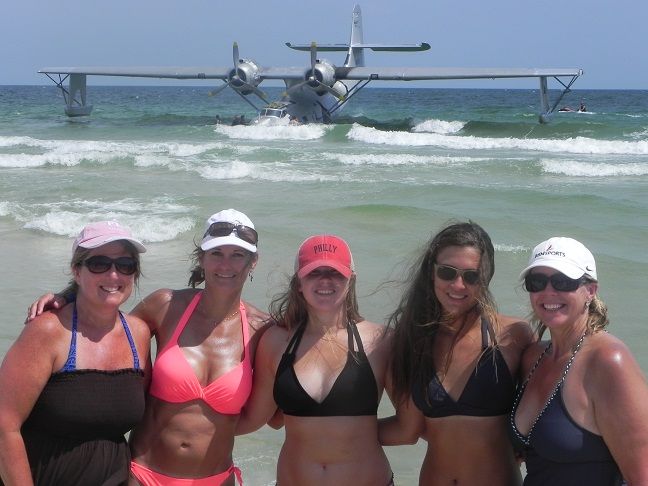 One of the last airworthy PBY Catalinas in the world is now beached in shallow water behind an iconic roadside bar on the Florida-Alabama line.

The giant Consolidated PBY Catalina, with its 104-foot wingspan and crew of 10 was used in World War II to bomb enemy ships and submarines and, most importantly, rescue downed aircrews and shipwreck survivors lost on the waves. They destroyed more than 40 German U-boats, sighted the Japanese fleet first at the Battle of Midway– giving the advantage to team USA in that pivotal battle, and rescued and evacuated thousands.

One of the most high-profile sea rescues for these big flying boats was after the sinking of the heavy cruiser USS Indianapolis in 1945 when a PBY, against orders, landed and took aboard an amazing 56 sailors from shark infested waters.

The PBY, a 5A model named “Dumbo” by its crew, bounced along 12-foot seas to rescue as many survivors as possible.

That act was being recreated in an upcoming Nicolas Cage movie USS Indianapolis: Men of Courage which is filming in the area using the retired battleship USS Alabama as a prop and the shallow waters of Mobile Bay as a set.

That’s how the restored PBY appeared at the bar.

According to Gulf News Today, the plane beached behind the Flora-Bama Lounge on Monday.

The owners described the incident to Guns.com via email Wednesday as a boating accident of unknown cause.

Settling nose-down in about three feet of surf, crews have battled for the past two days to recover the plane through a combination of dewatering, boats and tractors, but as of Wednesday morning, it remains stuck to the sand and is the target of much attention from Independence Day beachgoers.

As noted by the Orange Beach Community social media feed the PBY was beached to avoid sinking. 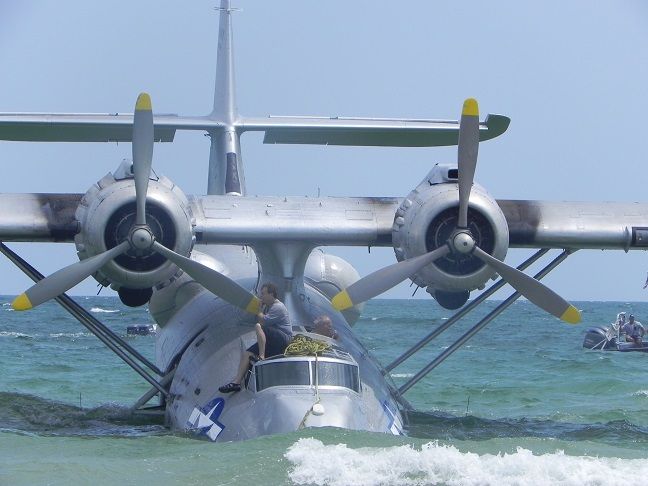 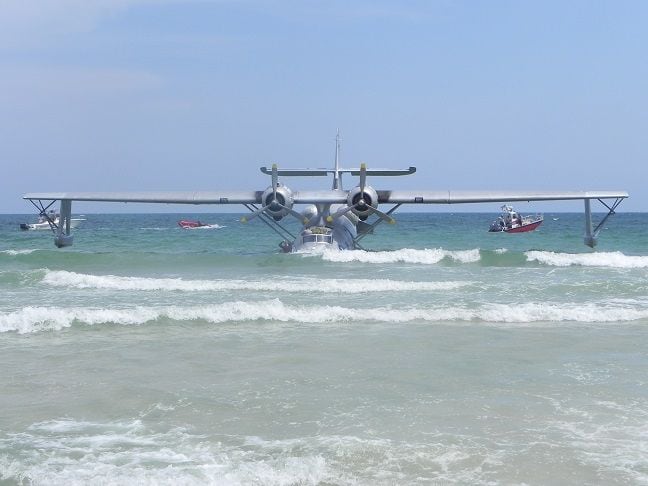 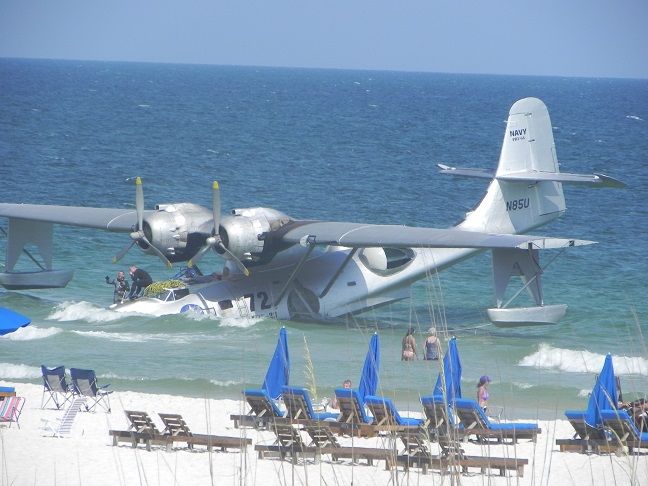 Drawing its name from the fact that it’s on the state line between Orange Beach, Alabama and Perdido Key, Florida, the Flora-Bama is perhaps best known for its annual mullet toss and polar bear swim on New Year’s Day, but is enjoying the attention.

According to Wikipedia of the more than 3,000 PBYs manufactured by 1945, there are only about 80 left in the world, of which less than a quarter are airworthy. From the tail numbers the plane is confirmed to be a PBY-6A model Catalina currently registered as N85U.

The big Cat served in the Navy (as N6453C) and later through a series of civilian owners as a fire bombing tanker until she was retired from smothering wildfires in 2006 and restored to her WWII-livery.

Here is an article from the Tacoma News Tribune about the plane before she left Washington earlier this month.

And some video of the PBY behind the Flora-Bama yesterday.

Note: This piece has been updated from its original posting to reflect, per individuals representing  the owners, that the PBY had no emergency and the affair is being treated as a boating accident by the Coast Guard.