Jeremy Renner on guns: 'I got good at them, and then I found a love for them' 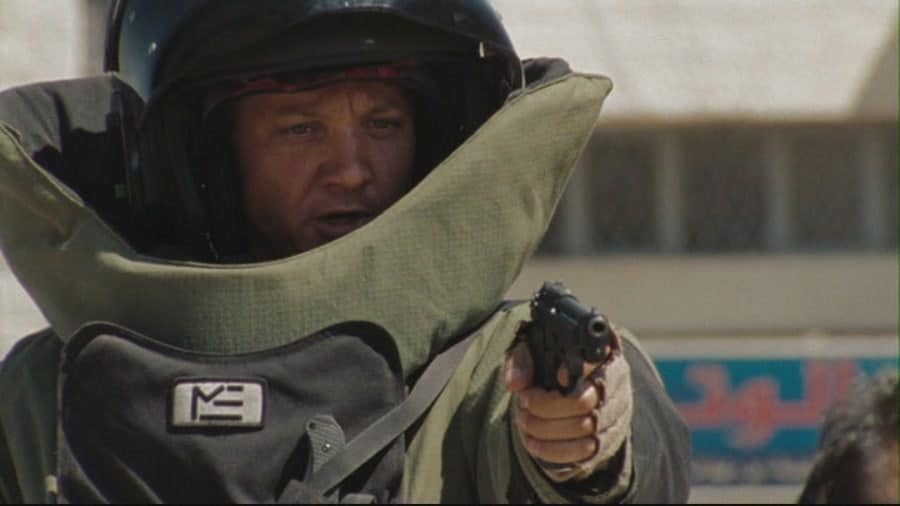 Jeremy Renner, who stars in the film The Hurt Locker and he plays Hawkeye in The Avengers movies, discussed his tough guy image and guns in a recent interview with Playboy.

The interview opened with a question about fear, specifically, “Are you anywhere near as fearless as those characters?”

Renner: Fear is a huge part of most people’s lives. It’s a very oppressive human emotion, the most powerful human emotion. Every day from when I was 22 to 32, I deliberately and consciously did things to fight fear. Things I was afraid of, like guns, sharks, heights, success, intimacy? I’ve checked those off the list. Even in the beginning of my career, my confidence always came from being fearless. I always went in to auditions with the attitude “I dare you not to cast me.” I went in and did what I thought was honest, truthful and just different. Maybe it was wrong. I didn’t care. Maybe they thought it was the worst. I didn’t care. I just went in, and still go in, with absolute fearlessness. It’s my strength as an actor.

Playboy: You mentioned guns. Many of your characters use them. Are you still afraid?

Renner: A gun is a really easy and terrifying thing to be afraid of. I like guns now, but I have only a couple—a couple at this structure and one at another. I got good at them, and then I found a love for them.

Playboy: Do you carry a gun?

Renner: No. For me it’s for home protection or sport shooting or target practice. I’m not a hunter. I spent a lot of time training for movies, shooting and getting comfortable with weapons. There’s no fear for me ever in a weapon now. I also have a few swords, but that’s because of what they mean to me; there’s a lot of history behind them. They’re all tucked away and hidden now that I have a baby.

Like many, Renner’s response was a basic, practical one. As for his feelings toward gun laws, that might be a horse of a different color. He, also like many, seems to have convoluted feelings on the subject.

Although he hasn’t publicly addressed the question, he did participate in a public service announcement produced by gun control advocates immediately following the tragic shooting at Sandy Hook Elementary School in 2012.

In the “Demand a Plan” video, Renner and a number of other celebrities asked the American public to demand a plan to prevent further mass shootings. The message gained traction on social media, in the news and even among business types across the country.

Although the message did not specifically advocate legislation, the group that produced it, Mayors Against Illegal Guns (now Everytown for Gun Safety), pushed for expanding universal background checks as response to the shooting. The legislation did not pass the U.S. Senate, however.

Some who oppose gun control labeled participants in the PSA “hypocrites” and in response to that, Renner reportedly released a personal message on his website (though the page has since been taken down) in January 2013.

We all want to point a finger, to place blame, and look for answers when we feel attacked or afraid, which is a natural human reaction. But I know there is no single solution to remedy what has been done or to prevent any future tragedies. Taking guns from people is no answer. I own guns and want to keep it that way. But guns don’t kill people… people kill people. Blaming movies or video games is no actionable solution.”