2 states to see final push for constitutional carry this week 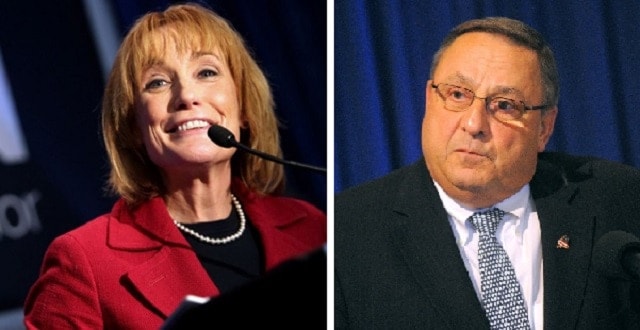 New Hampshire Democrat Gov. Maggie Hassan and Maine Republican Paul LePage have to consider thier options for bills to allow constitutional carry in their states this week. (Photo: Composite from AP images)

Governors in New Hampshire and Maine are set to make a decision on if the carry of a concealed handgun without a permit will be signed into law in coming days.

In New Hampshire, Gov. Maggie Hassan (D) has promised gun control groups she would veto a narrowly successful measure placed on her desk this week.

In Maine, Gov. Paul LePage (R) earlier voiced support for a proposal that passed the state legislature by large margins, but has since vowed not to sign any bills under protest of the lawmakers’ refusal to act on eliminating the state’s income tax.

LePage’s threat left the legislation’s sponsor, Sen. Eric Brakey, R-Auburn, bewildered due to the bill’s popularity after nearly veto-proof 87-60 and 23-12 wins in the House and Senate respectively.

“We had strong bipartisan support in both chambers,” Brakey told the Bangor Daily News.

“It really goes back to the fact that Maine really has a strong bipartisan tradition of supporting the Second Amendment,” Brakey said. “It’s not a Republican issue or a Democrat issue, it’s something that works for the state of Maine.”

Brakey’s measure, LD 652, authorizes a person not prohibited from possessing a firearm by federal or state law to carry a concealed handgun without first obtaining a permit. In addition, it allows for the possession of a loaded handgun in a motor vehicle, which is currently against the law.

The bill has seen significant push back from police lobby groups and national gun control organizations who have funded an extensive media campaign in an effort to derail the legislation.

“LD 652 eliminates an important tool that law enforcement uses to prevent dangerous people from carrying concealed, loaded weapons in public,” said retired Chief Bob Schwartz (Ret.), Executive Director of the Maine Chiefs of Police Association in a statement. “By passing this bill, the Maine legislature has put politics ahead of the public safety of Maine’s citizens, and the police officers who put their lives on the line every day to keep our communities safe.”

Although popular with New Hampshire’s GOP lawmakers, a bill that would allow those able to legally possess a firearm to carry one without a permit is unlikely to garner the signature of the state’s governor.

“Law enforcement, as well as citizens across New Hampshire, have strong public safety concerns about allowing people to carry concealed guns without a license and oppose removing the protections that the licensing process offers to help ensure that potentially dangerous individuals are not allowed to carry hidden weapons,” Hassan said in a statement in April that was acclaimed by Moms Demand Action and Everytown for Gun Safety.

The proposal, introduced by Republican Senate Majority Leader Jeb Bradley keeps the state’s current concealed carry permit system that has been in place since 1923. However, it makes clear the fact those permits exist does not prohibit unlicensed transport or carry of a concealed pistol or revolver in a car or on one’s person if the carrier is legally able to possess a firearm.

Keeping the option of issuing permits would allow state residents to carry while traveling to other parts of the country that honor New Hampshire’s current licenses.

The bill landed on Hassan’s desk last week and she has five days to act.

LePage has 10 days to either sign or veto the Maine bill, or it will become law without his signature.