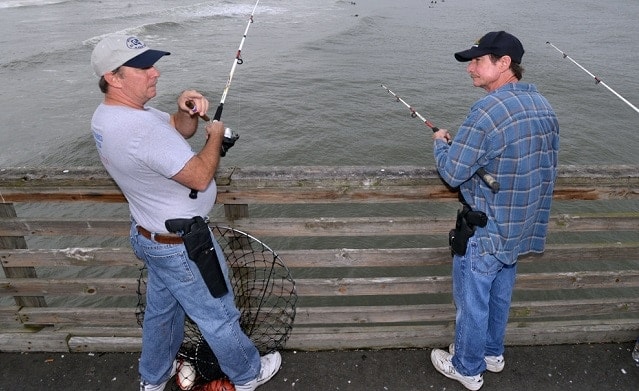 Sunshine State anglers are allowed to open carry while fishing as seen in the above on a Jacksonville pier. (Photo: Jacksonville.com)

A Florida gun rights group is taking the city of Tampa to court following a June incident in which a member was barred from area parks after openly carrying a handgun while fishing.

At the core of the suit is the Tampa Police Department’s handling of George Freeman who was lawfully armed while fishing at the Ballast Point on Tampa Bay last month. According to Florida Carry, of which Freeman is a member, local police first attempted to disarm the angler then detained him for an hour and searched his wallet and cell phone before releasing him with a trespass warning for all area parks.

“The fact that a person is peacefully exercising their right to bear arms is not cause for police officers to attack, detain, search, and trespass a citizen who is a law-abiding gun owner,” Florida Carry said in a statement emailed to Guns.com last week.

Florida is one of just five states that ban the practice of open carry. However, it is legal if done while target shooting, hunting or fishing and gun rights advocates have long exercised that right.

On June 18, Tampa Police spokeswoman Andrea Davis told Guns.com that Freeman had been warned in error and they intended to both spread the word to their officers on open carry exemptions while fishing and issue Freeman an apology. Likewise, as noted by an update to the case file issued the same day, the city rescinded the trespass warning.

Florida Carry argues that more needed to be done and filed a 41-page lawsuit on Freeman’s behalf against the Tampa Police Chief Eric Ward and Tampa Mayor Robert Buckhorn in their official capacities.

In the suit, represented by attorney Eric Friday, the gun rights group contends that the city made a number of civil rights violations to include running the serial numbers on Freeman’s guns without cause and violating his constitutional right to bear arms.

In the end, they are seeking damages, attorney’s fees and a number of court-ordered injunctions on running serial numbers without cause and harassing anglers who are openly carrying firearms.

To help raise funds for the litigation, Florida Carry is seeking crowd sourced donations and is holding an event on July 11 at Ballast Point to increase awareness.