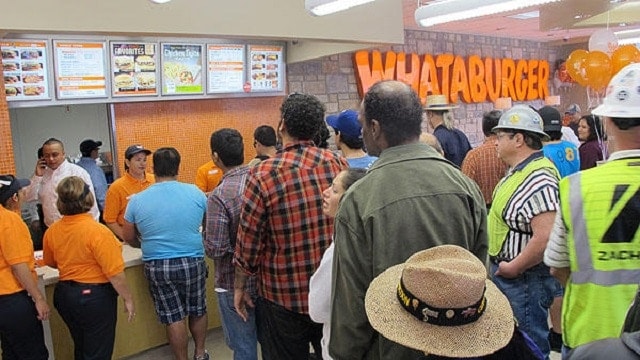 Whataburger changed its policy on open carry a while ago, and is reiterating its stance while arguing the chain supports Second Amendment rights. (Photo: MySanAntonio.com)

Texas-based Whataburger clarified last week it would prefer their customers not openly carry firearms, much to the delight of gun control advocates.

Founded in Corpus Christi in 1950, the regional fast food company has some 780 locations across the South from Arizona to Florida. In a statement released July 2, Whataburger President and CEO Preston Atkinson said the privately-owned chain long ago established a policy against open carry but chose to explain the reasons behind its decision.

“We’ve had many customers and employees tell us they’re uncomfortable being around someone with a visible firearm who is not a member of law enforcement, and as a business, we have to listen and value that feedback in the same way we value yours,” said Atkinson, who is an avowed hunter and concealed carry permit holder. “We have a responsibility to make sure everyone who walks into our restaurants feels comfortable. For that reason, we don’t restrict licensed concealed carry but do ask customers not to open carry in our restaurants.”

With Gov. Greg Abbott’s recent signature on legislation to bring the open carry of modern handguns to the Lone Star state, businesses across Texas have found themselves having to explain their stand on the subject.

Gun rights advocates argue the policy is misguided and the company is acting out of response to fear mongering.

“This statement by Whataburger is extremely premature and ignores reality all across the United States that open carry is not an issue,” CJ Grisham, president of Open Carry Texas, told Guns.com.

Although Atkinson advised repeatedly in the statement of his own personal feelings on gun rights and contends the chain supports the Second Amendment, Grisham is calling foul.

Grisham contends the company has not listened to their customer base and instead buckled under pressure from gun control groups.

“They haven’t taken a stand for their customers; they’ve instead caved to the anti-gun crowd that wants nothing more than to achieve their aims by bullying corporate America,” Grisham said.

In a statement emailed to Guns.com, representatives for the group advised the burger chain established their ban on open carry last June after the Texas chapter of Moms Demand Action repeatedly urged the company to change its policy through social media and by making numerous calls to the corporate headquarters.

“Last year Whataburger answered the call of moms across Texas and throughout the country who urged the company to stand up for the safety of its loyal customers and dedicated employees by prohibiting the open carry of firearms in its restaurants—and today the company is standing strong in its commitment to public safety,” said Moms Demand Action founder Shannon Watts.

“Parents should be able to go to family-oriented restaurants like Whataburger with their children and not have to wonder whether the person openly carrying at the table next to us is a good guy with a gun or a bad guy with a gun. Whataburger’s policy ensures that no employee or customer is forced to make that judgment call,” contends Watts.

“Businesses have a responsibility to protect their employees and patrons – especially in states with weak gun laws. Whataburger is a Texas institution and its home state allows the open carry of firearms,” Watts said.