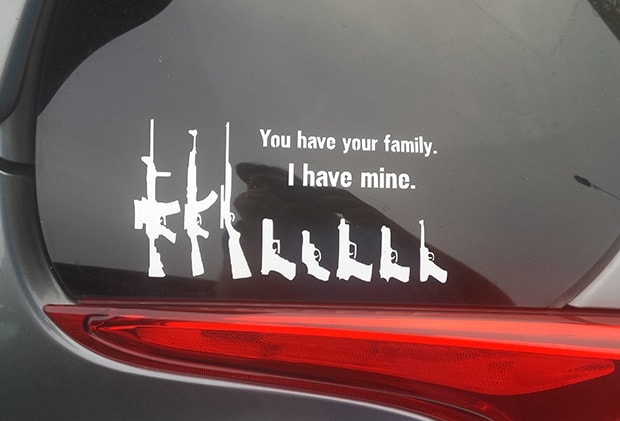 Bumper stickers can tell other motorists a lot about you…

It is common to see patriotic, gun-loving Americans displaying their pro-gun paraphernalia on their cars, clothes and other items. A lot of the time, we see “come and get em” signs, “don’t tread on me” stickers and even the occasional “you can have my guns, bullets first” shirts. I’m not here to tell you that you’re wrong because I believe in the same stuff you do, and I believe that it is our First Amendment right to free speech to express such views.

Much like the “should I carry concealed or open” debate, gun owners are largely divided on the topic of advertising their enthusiasm and support for firearms with stickers and slogans. Some gun owners just want to display what they believe with pride, while others hide their beliefs in an attempt to keep the general liberal public from forming any stereotypes about them.  To these people, life is too short to invite pointless hassles.  However, regardless of how you fall on this, it’s important to respect that it is the individual’s right to safely express themselves with gun stickers on the back of their car, or not.

For those of us who do put “pro-gun” stickers on our cars, there are a few things that we also need to keep in mind. First, we need to remember that each one of us represents the entire gun community. Most of those opposed to the 2A think that gun owners are violent rednecks with no values. While some of us may be rednecks (and I agree with Charlie Daniels – what this world needs, is a few more rednecks), I think we can all agree that we do have values. And, most of us try our hardest to keep our tempers under control.

The fact that each gun owner represents the entire gun-loving community means that every little thing we do, as gun owners, is under scrutiny. I’m not saying that you shouldn’t act how you want too, just to think twice before you do anything so stupid that it makes all gun owners look bad.

Second, when we put bumper stickers on our cars, we send a message to the police. For example, let’s say that you and I are traveling from PA to FL under the protections of US Code 926A. If you’re unfamiliar with this law, it allows safe continuous passage between states with a firearm just as long as I can legally possess and carry a gun where I’m from and where I’m going (i.e., the two states have reciprocity) and I don’t stop in a state where it is illegal (there are a few other stipulations, so please look up the law).

Let’s say we get a flat tire in Maryland, and Officer Friendly stops to see if we need any help. If we have a “you can have my guns, bullets first” bumper sticker, will he notice it? Do you think a few flags may be raised in the cop part of his brain? What do we do if he asks if there are any guns in the car? Our first response may be to deny the fact that we’ve got one, but will he consider our bumper stickers as reason enough to ask for permission to search the car?  Is that reason enough?

The sad truth is, chances are good that the officer has never even heard of 926A.  Most people haven’t. And even if he did, how do the liberal judges in Maryland interpret that law? Despite being in the right, there’s a good chance that we would be in for a long battle. And I’m sure that, by that point, I would be wishing I would have avoided the political message altogether.

The scenario probably could have been averted had we not put the “why carry a gun? Because a policeman is too heavy” sticker on the back of our car.

Our rights as Americans are ever being withered away by those who feel as though we should not have the right to protect ourselves. This is a reason to both step up with a unified voice, and a time to stay still; listen, look and observe. Choose wisely, and always remember that you don’t just impact yourself, but the gun community as a whole.