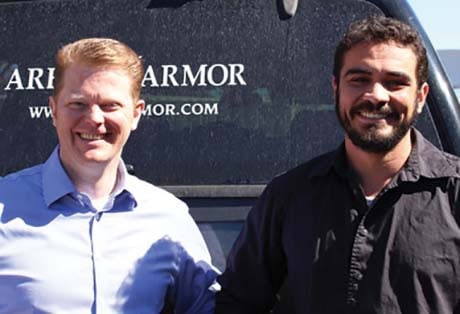 Ares’s current CEO Bryce Stirlen, left, and company founder Dimitri Karras in an undated photo posing by an SUV with an “Ares Armor” sticker on the back window. (Photo: Ares)

The chief executive officer at Ares Armor, Bryce Stirlen, apologized Wednesday for firing the company’s founder in an open letter.

“I made a mistake, I let emotions get the better of me and I reacted in a manner that is not in line with the way that Ares Armor Inc. composes itself,” Stirlen wrote on the company’s website.

He said he was sorry for his “errors” and hopes to regain the trust he’s built with Ares’s employees, management and fans since taking over as CEO.

Sincerity was also extended to the company’s founder, Dimitri Karras. “I apologize for posting information publicly that should have remained private. Regardless of our differences and how we have clearly hurt one another – it gave me no right to disrespect you, for that I apologize,” he wrote.

Stirlen said he met with Karras yesterday to discuss the situation. “Although both of us are emotional and have not fully resolved our differences, we made some good headway,” he wrote.

But Karras’s future with the California-based company is still unclear. “Haven’t spoke with him since yesterday. I am unsure of what this means as of yet,” he told Guns.com in an email.

Stirlen replaced Karras as CEO after his company, Lake House Capital Management, LLC, based out of Hinsdale, Illinois, acquired the assets of Lycrugan, Inc., the holding company of Ares. However, Karras held on to 30 percent of the company. At the time Karras said the buyout would afford him more time and the financial backing to attend to an ongoing court battle with federal regulators.

Federal agents raided Ares last spring for selling unfinished AR lower receivers, items that lack specific machining characteristics and a serial number. The feds confiscated materials from the company’s storefront, which were later returned, but Ares refused to give up customers’ names.

Strirlen said yesterday that Karras was fired for openly criticizing the company’s management and financial discrepancies, both of which Karras denies.

To defend himself, Karras compiled a 29-page document to explain his side of the story, which he said was issued privately to Stirlen over the weekend and made public only after Stirlen issued his letter.