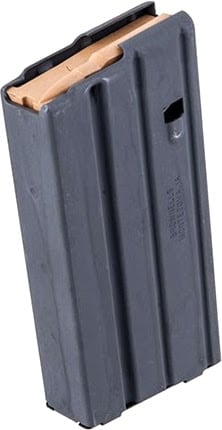 A step up in size for the familiar design. (Photo: Brownells)

The magazines are compatible with DPMS and SR-25-pattern rifles, the majority of the big-bore AR market. The first batch of mags are straight-body 20-rounders built using the same light aluminum construction and proven follower design that has made their .223 Remington/5.56 NATO magazines so popular.

“We began manufacturing our own magazines more than 10 years ago,” said Brownells President and COO Matt Buckingham.

“Our .223/5.56 magazines grew in popularity very quickly and eventually became standard-issue to the U.S. Military,” said Matt Buckingham, the company’s president and chief operating officer, about the magazines Brownells has produced for more than 10 years. “It was great hearing from troops all over the world about how much they appreciate our magazines. So, we took the same concept and designed a 30-caliber magazine to meet the needs of the expanding AR-style .308/7.62×51 market.”

“I’m certain customers will absolutely be impressed with the quality and reliability of these new mags,” he added.

Other features include a corrosion-resistant stainless steel spring, removable floorplate for disassembly and cleaning, and a dry film finished for improved lubricity and corrosion-resistance on the magazine body.

Brownells magazines have been used in some of the roughest conditions all around the world and these new .308 Win./7.62 NATO mags are expected to live up to the same standard.

Brownells is also launching a pair of complete .308/7.62 bolt carrier groups. They offer two models, one with a black nitride finish and the other with a MIL-SPEC-based phosphate finish with a chrome lining. Both have 9320 alloy steel bolts and 8620 steel carriers with S7 tool steel extractors.

The new .308/7.62 bolt carrier groups are individually magnetic particle inspected and shot-peened to test for flaws or defects. Brownells uses machined 4140 steel gas keys that are staked in place.