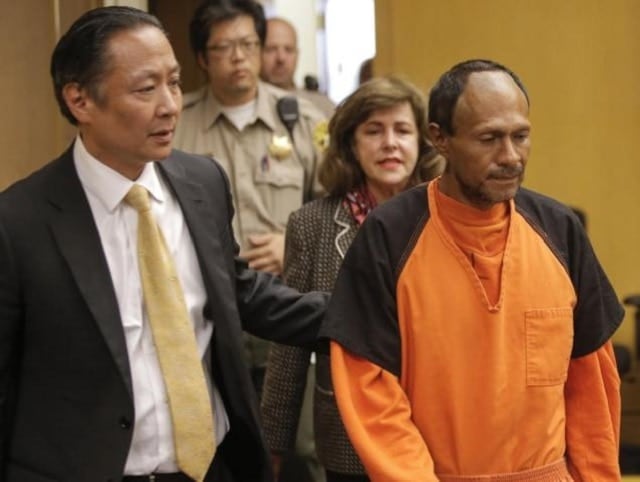 Juan Francisco Lopez-Sanchez contends he shot a 32-year-old woman on a San Francisco pier by accident with a found gun now tied to the U.S. Bureau of Land Management. (Photo: Michael Macor/Reuters)

Sources close to the investigation Tuesday revealed the pistol used in the fatal shooting of Kathryn Steinle on San Francisco’s Pier 14 may have been stolen from a federal agent.

Steinle’s alleged killer, Juan Francisco Lopez-Sanchez, 45, a Mexican national with at least five deportations under his belt, pleaded innocent in San Francisco Superior Court Tuesday. As noted by numerous publications including the San Francisco Chronicle,  KNTV-TV and KGO-TV, the gun used by Lopez-Sanchez was a .40 caliber handgun previously stolen from the car of an U.S. Bureau of Land Management agent, although it is not clear if the gun was government issued or a privately owned weapon.

According to the agency, the BLM maintains an armed force of 200 uniformed Law Enforcement Rangers and 70 Special Agent criminal investigators.

Steinle, 32, was killed apparently without motive while taking an evening stroll with her father on the iconic San Francisco pier on July 1.

Lopez-Sanchez told reporters in a jailhouse interview last week he shot Steinle accidentally after finding the gun wrapped in a T-shirt on a pierside bench. A non-native English speaker with a second-grade education, he went on to tell reporters that he was under the influence of sleeping pills and marijuana at the time of the shooting.

After the shooting, the handgun was recovered from the water just off the pier by police divers.

Prosecutors describe the killing as a murder executed “willfully, unlawfully and with malice” in a court filing and asked for a $10 million bond

“It’s very likely this was an accidental shooting,” said Matt Gonzalez, chief attorney for the San Francisco Public Defender’s Office, who was able to convince the court to lower Lopez-Sanchez’s bail to $5 million.

Federal law enforcement agencies have come under fire in recent years over the accountability of their arsenals.

In April, an FBI sniper’s rifle was stolen from his vehicle at a Utah hotel only days before a scheduled presidential visit to the area. Earlier this year, an investigation by the Milwaukee Journal Sentinel found that at least 49 guns belonging to the Bureau of Alcohol, Tobacco, Firearms and Explosives were lost or stolen nationwide between 2009 and 2013.

A prior report to Congress from the Government Accountability Office disclosed that 15 federal agencies reviewed could not account for 1,012 firearms over a three-year period ending in 2002. The GAO report also found that federal agencies did not always report in a timely manner missing firearms to the National Crime Information Center, a nationwide law-enforcement database.

Lopez-Sanchez is scheduled to return to court on July 27.