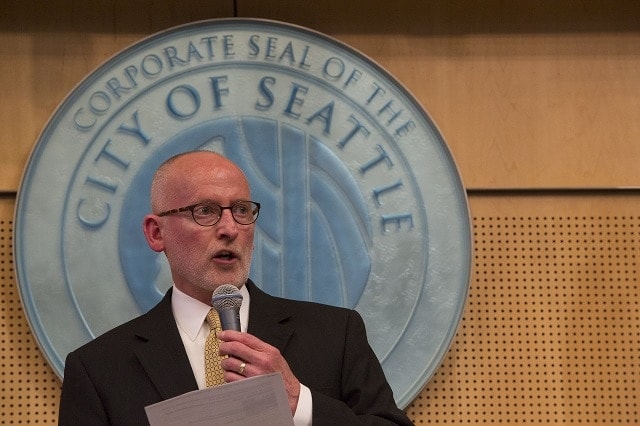 City Council President Tim Burgess has proposed a tax on every firearm and round of ammo sold in the city, which would be used to fund gun violence prevention programs.

The tax, which would amount to $25 on each modern firearm and 5 cents on each round of ammunition, is expected to skim as much as a $500,000 per year from the wallets of gun owners, the Seattle Times reports. This figure would be in addition to the various state and local retail taxes that approach 9.6 percent in the city already.

“Gun violence is very expensive,” Burgess said, noting that the city covered more than $12 million at public hospitals last year related to shooting injuries. “It’s time for the gun industry to help defray those costs and this is a very reasonable way to do it.”

Besides the tax, Burgess is also proposing an ordinance that would require firearms lost or stolen to be reported to the police under threat of a $500 fine.

“We often attach taxes to things that cause harm to our communities and we know that guns are causing harm,” said Zach Silk, campaign manager with the Washington Alliance for Gun Safety.

However, gun rights advocates warn that Seattle’s scheme may conflict with the state’s preemption laws, which hold that local governments cannot implement regulations on firearms in excess of the state’s own codes. City attorneys argue they are prepared to defend the ordinances, and cite preemption does not cover increases in taxation.

Gun industry groups may tend to disagree with that analysis. Lawrence Keane, senior vice president and general counsel of the National Shooting Sports Foundation, explained to Guns.com that Seattle’s move could be interpreted as a direct attempt to usurp the civil rights of gun owners.

“The NSSF will vigorously oppose this misguided attempt to blame the lawful and regulated commerce in firearm and ammunition products for the violent acts of criminal,” Keane said. “The proposed tax is nothing but a poll tax on the exercise of a fundamental civil liberty protected by the Second Amendment.”

Alan Gottlieb, chairman of the Citizens Committee for the Right to Keep and Bear Arms, told Guns.com Wednesday that his group may also see the city in court if the proposal becomes law.

“It looks like we will get to sue Seattle again and notch another win,” said Gottlieb. “We have already sued them under the Washington preemption law and won before. They make winning firearms freedom one lawsuit at a time fun!”

The move in Seattle is not the first time that lawmakers have proposed to raise money from arbitrary tax increases on guns and ammo.

Earlier this year a Missouri state representative introduced legislation in the wake of the Ferguson Riots mandating all police wear body cameras paid for through a special sales tax on munitions. Proposed “sin taxes” on ammo was further unsuccessfully pursued in Illinois and Capitol Hill in recent years.