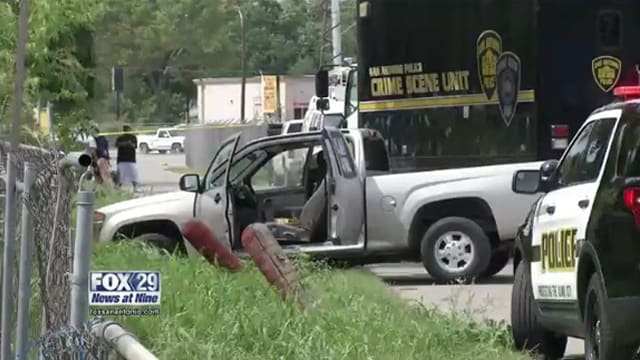 A second suspect is still at large, but authorities believe he was either struck by gunfire or ran over by the truck as his comrade attempted to get away. (Photo: Fox 29)

An attempted robbery at a San Antonio automotive shop Tuesday afternoon was thwarted when the owner of the business opened fire on the suspects, killing one and possibly wounding the second.

The two suspects drove to Vail’s Industrial Park around 2 p.m. One of the men stayed in the truck, while the other walked into the business, brandished a gun and demanded the owner hand over money, as well as the owner’s wallet.

However, instead of grabbing for his wallet or any cash, the owner of the shop reached for a handgun. An exchange of gunfire ensued, and the suspect sitting in the truck was struck in the stomach.

The injured suspect crashed the truck close to the shop after his attempts to flee from the scene were unsuccessful. Authorities believe the second suspect was injured either by gunfire or struck by the truck when his accomplice attempted to drive away.

After police arrived on the scene, the first suspect was transported to a local hospital, where he later died. The second suspect, who is described as a Hispanic male in his 40s, wearing a light blue polo shirt and adorned with numerous tattoos, is still at large.

Julia Reyna, who lives nearby, told a local Fox affiliate she heard the gunfire. According to her account, about eight shots were exchanged, but the business owner, whose name has not been released, apparently walked away unharmed.

Douglas Greene, spokesman for the San Antonio Police Department, confirmed no charges are being sought against the business owner, as it appears he acted in self-defense.

“You work so hard for your business to keep it up and then for somebody to come and rob you, no,” said Valerie Lopez, whose 80-year-old mother lives nearby.

She said, just as the business owner did, she would defend herself, her son and her property if someone was attempting to rob her.