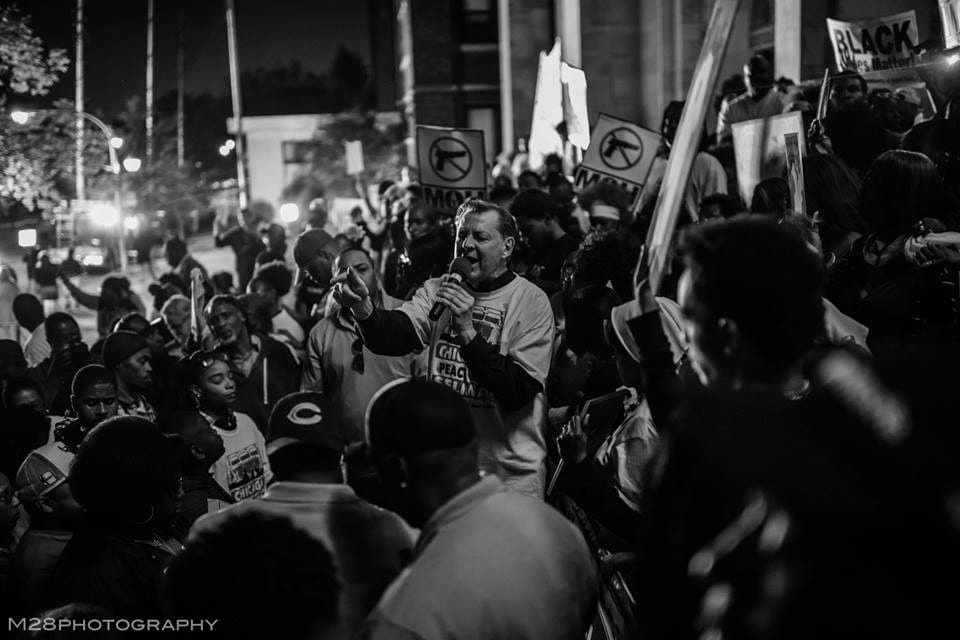 Chicago anti-violence advocates, including the controversial Father Michael Pfleger, filed suit against three towns neighboring the Windy City where gun stores reside and allege that the stores’ presence burden residents in the area by contributing to ongoing violence.

“[A]llowing gun shops in their respective jurisdictions to sell guns in a manner that disproportionately jeopardizes the lives of African Americans, causes mental anguish and distress and diminishes the value of their homes and other property,” reads the complaint, which was filed in Cook County on Tuesday.

“Illegal gun use makes it less desirable to live in such parts of the city of Chicago and in turn makes such neighborhoods more economically and racially isolated,” the complaint reads.

The Coalition of Safe Communities and four other area advocates join the south side pastor in the lawsuit that aims to force the Illinois towns of Riverdale, Lyons and Lincolnwood to tighten laws that regulate operations of gun dealers. While states are often tasked with regulating such establishments, the state of Illinois authorizes towns to carry out those regulations, according to the complaint.

“We have begged the stores to just make sure they regulate themselves, but I guess the money is too tempting,” Pfleger says in a statement on social media. Although polarizing, he has gained the support of his community for his headline-grabbing activism. Last month Pfleger along with the Rev. Jesse Jackson and the Brady Campaign to Prevent Gun Violence had a standoff with the owner of Chuck’s Gun Shop in Riverdale during a protest of the store.

“Since they won’t regulate themselves we are now demanding the towns put in place the regulations. They make them do good business. We know this is hard, since the towns are making good tax money off of them, but lives matter more than money!” he says.

The complaint cites a 2014 report by the city of Chicago that discusses the impact of gun violence on the city and traces crime guns back to where they originate. An average of 12 percent of guns recovered by police in a three-year period were sold by three stores, each of which reside in one of the three towns, according to the complaint.

While gun rights advocates have claimed those prohibited from owning a firearm obtain them from a black market or steal them from law-abiding citizens, the plaintiffs blame lax regulations of the stores, which allegedly allow dealers to be negligent when vetting customers or knowingly sell to straw buyers and criminals.

According to the complaint, routine checks of the stores that are more demanding and more frequent than those by federal regulators would cut down on gun trafficking and violence in nearby areas.

Modeling policies off of a strict gun shop license program passed last year by Chicago City Council, the plaintiffs suggest town inspectors should ensure gun dealers have adequate security devices like cameras, alarms and lighting; that management perform background checks before hiring employees; and stores maintain a transparent record of all gun sales. If store owners fail to comply they risk revocation of his or her dealer’s license.

Instead of monetary relief, the plaintiffs are asking for legal fees and the court to force the towns to implement the aforementioned regulations.