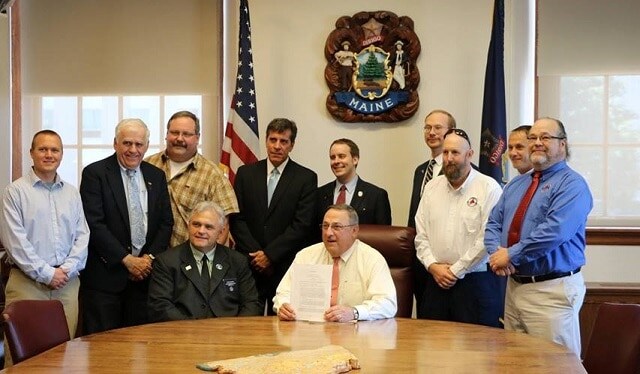 Republican Gov. Paul LePage gave his signature to a popular bill Wednesday to allow lawful concealed carry of handguns in Maine without a permit starting this fall.

The new law, advocating what is termed constitutional carry, will allow residents who are not prohibited from possessing firearms to carry a concealed pistol or revolver while preserving the current licensing scheme to grant those who travel out of the state reciprocal rights.

Introduced in March with broad support, the bill slogged through the Legislature’s Criminal Justice Committee, who voted against its passage but in the end won over the state House and Senate in bipartisan votes.

Although LePage had promised to veto all bills placed on his desk by the state legislature over a standoff on agenda issues, he signed the gun reform proposal Wednesday in a small ceremony without comment. LePage went on to “pocket veto” 19 other bills, although the effectiveness of this maneuver is being debated by the state Legislature.

“It was a great honor to be present for the signing of my constitutional carry legislation into law by our Governor,” said the bill’s sponsor, Sen. Eric Brakey, R-Auburn. “Many Maine people have worked towards this goal for over two decades. It is wonderful to finally see this commonsense proposal enshrined in Maine law.”

This permitless carry move puts Maine in the same club started by Vermont and joined by Arizona, Alaska, Arkansas (although open to interpretation), Wyoming and Kansas in the past generation.

Besides decriminalizing concealed carry without a license by those 21 and older who are not prohibited from possessing a handgun, it also allows for military service members over 18 to carry without a permit. One sticking point for gun rights advocates, a requirement that anyone carrying a firearm must disclose to police the fact if stopped, was included in the final version of the law.

Gun control groups as well as the Maine Gun Owners Association joined with the Maine Chiefs of Police Association to condemn passage of the legislation earlier this week and called upon LePage to veto the measure. The groups cited that current permit holders have to undergo mandatory gun safety and legal education before carrying a concealed weapon, which is not required under the new law for those without a permit.

The Maine State Police supported the bill as did a number of gun rights groups to include the National Rifle Association who counted Wednesday’s signing as a victory for the Second Amendment.

“Maine now joins an ever-growing number of states in passing permitless carry,” said Chris Cox, executive director of NRA’s Institute for Legislative Action, in a statement. “Despite the best efforts of Michael Bloomberg-funded groups to distort the truth, the Maine legislature and Governor stood strong for freedom.”

Maine is the second state to adopt the practice this year, following in the wake of Kansas where Gov. Sam Brownback – like LePage a Republican – signed a measure in April. Further, Mississippi adopted a law effective July 1 that allows for off body carry in a purse or bag without a license.

At least three other states, Montana, West Virginia, and New Hampshire saw governors, all Democrats, veto permitless carry bills sent to them in recent months by lawmakers. In each of these cases, public safety concerns brought up by gun control and police lobby groups were cited.

As noted by Brakey, Maine’s new law will go into effect 90 days after the adjournment of the Legislature, which should be in mid-October.