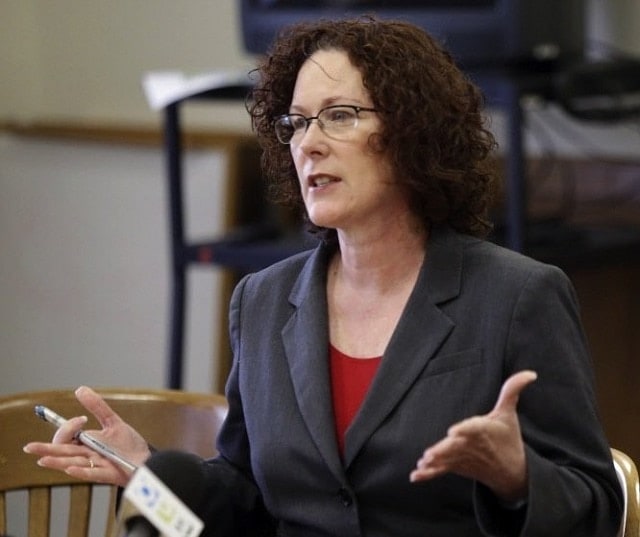 Rep. Val Hoyle no longer has to worry about a recall effort against her, as she has announced she is likely moving on. (Photo: Don Ryan/AP)

A move to recall Democratic House Majority Leader Val Hoyle over issues to include passage of gun control legislation, halted this week as the lawmaker announced she was stepping down.

The recall petition against Hoyle was filed in April by gun shop owner Jason Thiesfeld of Junction City who testified against SB 941, a proposal that would expand background checks to include most private gun transfers. Thiesfeld alleged that the House leader catered to big campaign donors rather than the needs of constituents in backing the legislation, which was signed into law by Democratic Gov. Kate Brown in May.

Now, with Holye’s announcement that she was likely stepping down from her spot as the House’s top Dem and focusing “on getting out of the building,” the effort to force a recall vote for her seat is calling it quits.

“With the announcement today of Val Hoyle’s resignation as House Majority Leader, I have decided to suspend the recall effort regarding her House District 14 seat,” said Thiesfeld in a statement emailed to Guns.com.

The gun rights advocate noted that although his group’s push over the past three months did not ultimately result in a recall election, going the distance at this point is unneeded.

“I feel confident that Representative Hoyle would not relinquish her power within the House leadership if she had any intention of campaigning to represent us again next year. Therefore, knowing that she will not be in the House leadership for this winter’s short session gives me the confidence to withdraw my petition and not put the citizens of our state, district, and county through the expense or turmoil of a recall election,” Thiesfeld said.

Thiesfeld had to obtain 3,600 signatures, the equivalent of 15 percent of votes cast in Hoyle’s district during the last election, by July 13 to trigger the recall. However, in May the gun shop owner, listed as chief petitioner for the campaign, drew fire from Our Oregon who filed a complaint with the state Election Division over alleged improper petition circulation.

Hoyle told local media that she doubted Thiesfeld had enough signatures to proceed, hence the end of the campaign against her.

“I honestly haven’t been paying much attention,” she told Oregon Live.

Although the effort against Hoyle may be over, a separate effort to show both Rep. Susan McLain and Sen. Chuck Riley the door over SB941 and other issues is proceeding.

Oregonians for Social Accountability, the group behind the recall have to collect more than 6,200 signatures for Riley and 2,800 for McLain. Once triggered, the elected official can resign or choose to hold a special election where voters will vote to recall the official. If they are recalled county commissioners will appoint a replacement from the same political party.

“This is a vote of no confidence on the direction and leadership of these two politicians more than anything,” said chief petitioner Ben Busch in a prior statement emailed to Guns.com.

In 2013, Colorado Senate President John Morse and Sen. Angela Giron were the target of grassroots recall efforts following their endorsement of strict, widespread gun control initiatives. Despite some $350,000 in funding from the Bloomberg group to help defend their seats, Morse lost the recall by 343 votes and Giron lost by 4,154.