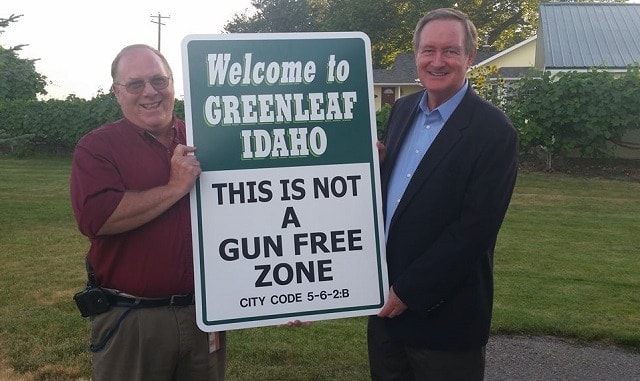 U.S. Sen. Mike Crapo was in Greenleaf for a town meeting in June and posed with the proposed sign and Councilman Steve Jett. (Photo: Facebook)

Greenleaf, population 846, doesn’t maintain a police force of its own but did in 2006 pass a citywide resolution asking that each household acquire a gun and ammunition and seek training in the use of firearms. Now a city leader and area businesses have purchased five street signs advertising the city is not a gun free zone.

“Myself, as a city councilman, and apparently the rest of the City Council agrees that gun-free zones are targets,” said City Councilman Steven Jett. “If you look at the shootings that have happened, they are gun-free zones. Schools, malls and recently churches. I want people to know that this is not a gun-free zone, and we are not a target.”

The council is waiting for input from the Idaho Transportation Department before erecting the signage. While the state has the signs under consideration, U.S. Sen. Mike Crapo, a Republican with a history of introducing pro-gun legislation in Washington, visited a Greenleaf town meeting and expressed his support for the message behind the signs.

Originally founded by pacifist Quakers who named the settlement for noted abolitionist John Greenleaf Whittier, the city responded to the national fallout from Hurricane Katrina with its encouragement to maintain firearms. Besides guns, the city asks all residents to maintain emergency stockpiles of food and water. The city not only talks the talk but walks the walk, by offering gun safety and hunters safety courses at City Hall for area residents.

The law is based on a similar one adopted by Kennesaw, Ga., in 1982 that requires all homeowners to own and maintain a firearm.

Since Greenleaf’s adoption, which was publicized for better or worse on late night comedy shows, the towns of Nelson, Ga. and Nucla, Colorado, have made similar moves which brought threats of lawsuits from gun control organizations.

“We also cited that the Idaho Constitution states that the mayor of any city may call up anybody to enforce the law if they have to,” Jett said.