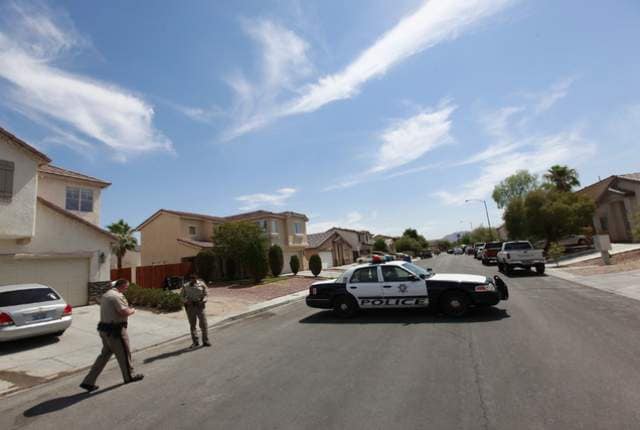 While Tarneshia Harris was lying on the lawn suffering from a gunshot wound, the older brother asked why she broke into the house, to which she replied she was “trying to protect the kids,” but the family or authorities do not know what she meant. (Photo: Chase Stephens/Las Vegas Journal-Review)

A violent home invasion in Las Vegas turned into a shootout after a 23-year-old man opened fire on two intruders who had pointed a gun at his 12-year-old brother and attacked his mother.

Just after 9 a.m., the female suspect, who was later identified as 29-year-old Tarneshia Harris, but also goes by the name Tiffany Carter, knocked at the front door of the home, the Las Vegas Review-Journal reported.

The 12-year-old answered the door and Harris told him her car broke down and asked if she could use the phone. The boy said okay, but as he closed the door, Harris pushed him and put him in a headlock, while a second suspect, a male whose identity has not been released, forced his way into the home.

Armed with a stolen .22-caliber handgun, the male suspect pointed the pistol at the boy and told him to be quiet. But when the male kicked in a bedroom door where the boy’s older brother was sleeping, things took a different turn.

The suspect aimed the gun at the 23-year-old brother, who was still lying in the bed, but he grabbed a .40-caliber handgun that he keeps next to his bed. The suspect then fired a single shot, and the older brother returned fire, striking the suspect, who ran out of the bedroom.

At that point, the house was filled with the sounds of the mother and 12-year-old screaming.

The older brother emerged from the bedroom to see the suspect still standing at the front door, so he shot him a second time. The suspect then dropped his gun and ran from the home.

But Harris was still in the house, now fighting with the mother. The older son feared Harris may have been armed as well, and fired at her, which sent her running outside.

The 23-year-old followed Harris outside as the other family members called the police. The older brother found Harris, lying on the ground suffering from a gunshot wound, but the male suspect was trying to get away in an Oldsmobile at the time. So the older brother returned to his room, grabbed a rifle and shot at the vehicle, in an attempt to prevent the suspect from leaving.

The suspect was still able to drive away, but was found by authorities about four miles from the home. The suspect, who was still in the car, was pronounced dead on the scene. Harris, who has an extensive criminal history, was transported to a local hospital where she remains in critical condition.

Authorities said the brother fired a total of six shots from his pistol, but did not indicate how many times the suspects had been struck.

The brother, nor any of the other family members were injured.