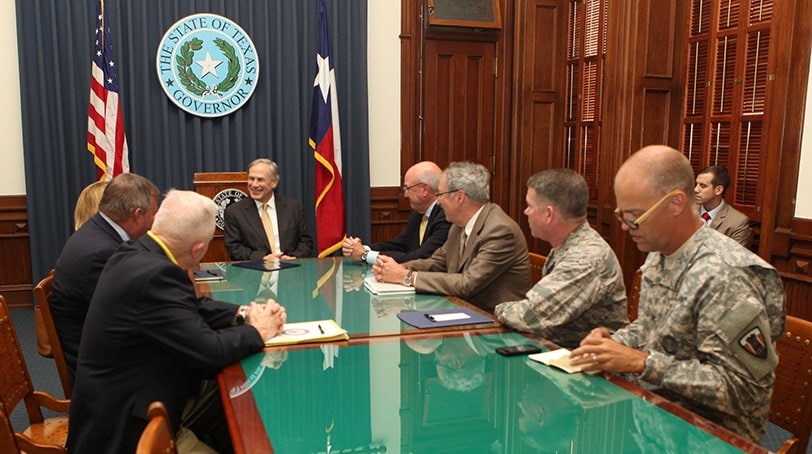 Gov. Abbott Meets With National Commission on the Future of the Army on Friday, July 10, 2015. (Photo: Texas Office of the Governor)

After news of the Army’s plans to cut 40,000 troops from its ranks, the governor of Texas on Friday called for the preservation of his state’s soldiers.

Gov. Greg Abbott met with the National Commission on the Future of the Army to express his support for the Texas Army National Guard and Army troops residing in the state.

The Texas National Guard “has a proven track record of providing cost-effective, highly capable combat reserve forces whenever called upon for the national security of America,” Abbott wrote in a letter to the commission.

“These are incredibly difficult choices,” said Brig. Gen. Randy George, director of force management in Army operations, during a briefing Thursday. “This was a very long, thoughtful and deliberate process that took place over the last 18 months.”

The cuts begin in October and won’t be complete until 2018, but will affect almost every Army installation in the U.S. and overseas, George said.

“We want to minimize the turbulence we have for our soldiers and families,” George said.

Texas has a lot to lose, should soldiers in its state be released from duty. The Lone Star State invested nearly $2 billion over the past 10 years and has been awarded more than $60 million in grants over the next several years to be spent on roads and infrastructure in support of its Army National Guard, Abbott wrote.

“The community support for troops stationed in Texas is unrivaled by any other state,” Abbott wrote. “Low costs of living, affordable off-base housing, and state-funded support to military families and retirees make Texas the gold standard in supporting our nation’s warfighters; active, guard and reserve. I encourage you to closely consider these factors as the Commission develops its recommendations on the future of the Army.”

Congress created the commission last year to study the Army’s structure after public discussion was had over Army National Guard’s size and whether the AH-64 Apache helicopters should remain a component of the force.